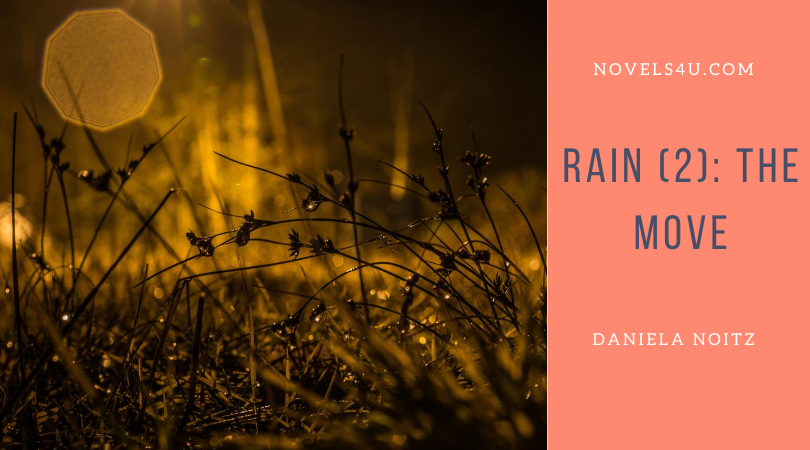 In my dreams I saw it in front of me, always the same image, everything lost, everything a victim of flames, and you stood in front of what was once your house, with nothing but what you were wearing and what you were had in your bag that you took to your friend’s house. I had to wait a long time, endure the dreams for a long time, until the rain came back and with it you.

“I don’t know how long I stood there staring at the house. Two ravens sat on a weeping willow that was close to what was once our house. Not the tiniest twig of this weeping willow was even bent. „If you are looking for someone to blame, look into your own heart, into your own head,“ I heard her croak. At first it was just very quiet. The ravens once had their song taken away because they were so arrogant, it flashed through my head. Supposedly, as companions of the god Odin, they can see into the past and into the future, I had read once, but a lot of nonsense is also written. At first her croak was gentle, as far as it can be a suitable attribute for this kind of utterance, but it grew louder and louder over time, until it seemed to culminate in a wild scream. It was a message to me. But maybe I was just imagining it. Did my mind wake up or did I gradually go crazy? Could it be that these birds were communicating something to me, in human language, or was I just putting something in their mouths that lived within myself? I couldn’t move when it started to rain. I couldn’t move as the rain continued. The ravens were still screaming. I wanted to leave, but I had forgotten how to do it. ‚Why didn’t the fire brigade come?‘ Shot through my head. It couldn’t have been the night, because one night is like the other for the fire brigade. Nothing could be changed. An idle question. I did not yet know the answer, I was sure of it, even if I could not pronounce it, just as I was surprised by the image of the fire, which was so clear and convincing as if I had been there myself, but it could not be, because I had been to my girlfriend’s last night. In the morning I was on my way, right after breakfast, as I had promised my mother, because we wanted to prepare everything for my brothers‘ birthday party. Was handy when the brothers were twins. Went in one wash, so to speak. Nobody had forewarned me, as if it were a matter of course that a house with all its things and residents would be there one evening and the next morning it was just a charred piece of black, as if it were the only possibility for this house. Nobody had noticed anything, only that that night I suddenly got so hot, so unbearably hot. I woke up thinking I was going to burn. It had been a rather cool night. The burning didn’t affect my appearance either, it was inside me. I went to the kitchen to have a glass of water. It evaporated as soon as it touched my lips. I went back to bed. The flames licked unchecked inside me. But it’s all just a bad dream. I stood and burned like in the night. The high-pitched croak of the ravens numbed me. ‚You can’t hide from the truth forever,‘ croaked the ravens, and then it finally came, the rain, but the ravens didn’t let up with their crows and neither did the burning in my body. I was standing in the rain and couldn’t move. I was finally packed and put in a car. Still, the picture didn’t change before my eyes. I was blind to everything else, only the charred something remained, and the intact weeping willow with the ravens. Finally, they were silent,” you continued, in the rain, and ended with him.