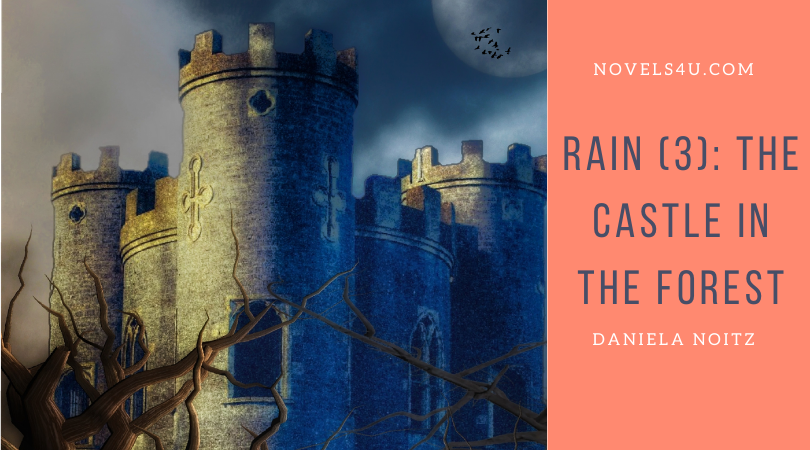 And you lost yourself in the rain, just as the rain had carried you to me. From wherever, from whatever time. I never asked. Were you present or a relic from times long past? Did you come from here or from a utopia, nowhere and everywhere? There is nothing to interpret. Just listen.

„And just as I was put into the car by strong arms, I was thrown out again. The image in front of my eyes, the flames that I saw, as if I had not only been there but was right in the middle of it, had me accompanied all the way. Only when the car was already far away, the rain shook me awake, pouring unchecked, did I find myself again, the bag, everything I had, I held tightly. ‚Go, go over the bridge‘, I heard the croak that I already knew. How quickly something becomes familiar when one has lost everything that is familiar. One longs for a stop, and if these were only two ravens, terrible birds of the night. And yet it was there, the bridge, At the beginning of the forest, a little brick bridge, behind which the path continued and got lost in the darkness, the forest was so thick. I was about to obey, but then I saw them, at the other end of the bridge, two wolves, one black, one white, and me they recoiled, and as if the ravens had sensed my fear, they flew down from their tree and sat on the back of the strong animals, one on the black and one on the white wolf. The wolves then lay down and looked at me. with their gentle eyes. ‚If I’ve already lost everything, what else will it do if the wolves tore me apart?‘ I thought and walked across the bridge, and when I was at the height of the wolves they rose slowly, remarkably slowly, as if they were going to they feel that my heart was beating up to my neck, rose to walk in front of me, to show me the way. I followed them without suspicion. No matter where they would lead me, I suddenly felt strangely safe around them. With no sense of time, I trotted after them, long enough not to feel my exhaustion and still feel the rain. We seemed to have arrived there. I found myself alone in the middle of the forest. Why had they just left me there? Slowly it peeled itself out of the darkness, an old castle that already seemed to have been taken over by the forest, it was so overgrown. It was hard to tell where the forest ended and the castle began. I knocked cautiously. The throbbing cut through the silence, because apart from the patter of the rain there was nothing to be heard. A tall, thin man opened the door for me and motioned for me to follow him. He apparently led me into the living room, because there was a heavy couch and a number of other seating furniture, all of which were covered with white linen. Nobody seemed to live here, and yet people were found. A fire burned in the fireplace and immediately the picture was there again, the burning house, the burning people, and in the middle of it someone who seemed to conjure up the fire with his arms raised. But who was it? The flames licked around the person as if to make a performance, submissive and humble. ‚It is good that you are here, because now you are finally safe‘, a fine, clear voice tore me from the picture, tore it up. I turned in the direction from which I suspected the voice was coming and saw the most beautiful woman I had ever seen. ‚I am your aunt and since you were the only one saved, I brought you to my place. My sister, my brother-in-law, my nephews … Now let’s not talk about it, ’said my aunt. My voice failed me. Actually, I should have asked, asked how she knew and what she was planning to do with me and the like, but even my thoughts failed me. It was so engaging and terrifying at the same time. A horrible premonition crept into me.“
And the rain passed, leaving me alone with myself, and I waited again.