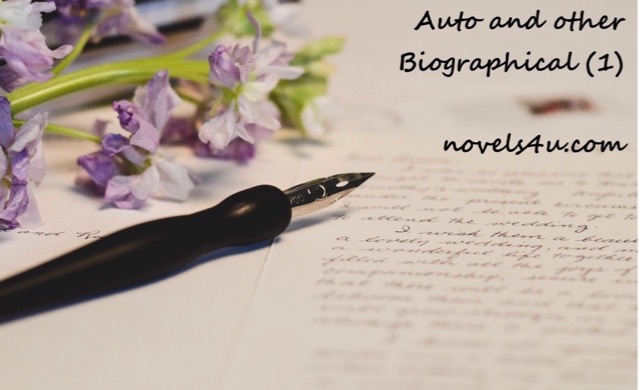 There are many people who like to talk about themselves. At least that’s what they say. There is at least a great deal of agreement about what this „telling about oneself“ means, a series of stories that happened in an individual’s life. Anecdotal or pointed, depending on your temperament, it can also be quite amusing. And it is said that one better understands the person who relates such events from his life. Unconsciously the socio-demographic origin, the way of dealing, the marital status, the career becomes clear. All this leads to an understanding and justifies the phrase „tell of yourself“. It can also be called Autobiographical. The prefix auto is more than doubtful. Stories themselves from their own past, are themselves told – euphemistically expressed – misty-eyed. It cannot be otherwise, as much as you endeavor to be objective.

Relative to the first years of life, this thesis is easy to understand and hardly anyone will contradict me. One cannot trust one’s own memory from this time, for one does not even remember these events because they would have been remembered, but because they are told one, over and over again, until one thinks so. Actually, it is about the story you have experienced yourself. An exciting performance of our brain, which nevertheless does not change anything, that it is not your own story. What makes it even more aggravating is the people who tell them because their gaze on those being reported is emotionally distorted. These are first and foremost close relatives, either close friends. Then there are phrases like „My God you were sweet“. In any case, that speaks for a rational memory. These embellishments make it hard for one to focus on the facts even when they are framed, like a halo, this legendary „sweet,“ that mild, gentle glow that ultimately says nothing but what it was then you were sweet, and look at you now. One does not think so far, caught in the sweet candy stage.

At least at this point is for me, that is definitely a lie, because if I know something of me, I’m not sweet. Well, as adults, the least of them are sweet, if they’re not trying to keep their childhood status forever, but I’ve never been, because I never wanted to be. Rather, it was my ambition to be wild and rude and rebellious and challenging. Even if I did not call it that then. Without putting it into words, it was easy. Not even to rebel, but to cope with the joy of life, overflowing and passionate. I wanted to jump and whistle, rock and slide, climb trees and wade through streams. All that sweet little girls in pretty dresses do not want to do. That is how they are told. I do not know whether it really is the case that they do not want it or simply try to emulate the picture of the mother of the sweet girl, because I never asked the sweet little girls, especially because they probably do not really know themselves. In any case, I was the cause of my mother’s constant grief. I wish it had been different, but it was simply impossible for me to deny myself that far, just to make my mother happy. Now she was so pleased that she had a girl, and then this disappointment. She had dreamed of it, she told me over and over again how she would pack her girl in lace and ruffles, how she dances ballet and moves gracefully. So, the exact opposite of what I was. From the beginning, I was one big disappointment, the disappointment of her life. Although she did not fail to accuse me, I made her to diligence. This was and is not the case at all. I was just as I was, and in it a lot, just not sweet. So much so that I do not really want to tell anything about myself, at least not in that sense. It may have corroborated the thesis that narratives about oneself from the first years of life are always distorted, in whatever direction. The distortion is not limited to this time, even if it is no longer so directly in later years to make out. Still, I dare say what we tell of our past is always distorted.