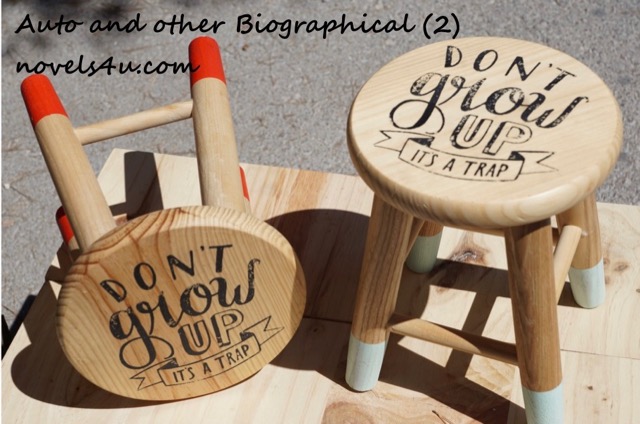 No sooner does the call to tell a human of himself, no matter whether it comes from another person or from himself, begins the distortion of history. This has nothing to do with deliberate lies, but on the one hand with the desire to always be yourself as good as possible. and on the other hand, with self-censorship. Therefore, memory stores the stories in consideration of this premise. It is a very healthy attitude to oneself.

In addition, it comes through the temporal distance to a distortion. Over the years, we smooth the bumps and form a compact whole where there was none before. Therefore, we never tell about ourselves, but about what we perceive as ourselves and what we remember about it.

This type of self-expression is especially popular with artists. But not only that they like to give this to the best, the recipients of the artistic performance are for the most part eager to hear it. The motivation of the artist is that they want to assure you that they have experienced something and that they have the right to express something. Or they just take themselves very important. On the part of the recipients, the motivation to hear it lies in the desperate search for a connection to understand the artistic realization. An explanation from the autobiography. Then a lot becomes more accessible. Sometimes you even get the impression that it has become a fun game to find out how big the autobiographical part of the work is. It makes a lot easier, more comprehensible. A thought as trivial as it is misguided.

If an artist takes himself seriously, even in his/her artistic expression, then he/she should not actually say anything about him/herself. Moreover, it should seem as if he/she is coming out of nowhere, without past or history. Then and only then can the work stand by itself, can it be conveyed and considered.

What does it matter, what someone has learned, what profession he/she has exercised, what awards he/she has received. Or do I need as receiver such information to judge the quality? Do we dare ourselves so little? Do we have to use the foreign judgment as a yardstick to dare ourselves? We have to, because we dare hardly have an opinion of their own, possibly against all others. Awards and awards speak for quality. This has finally judged people who understand what. I can hold on to it. And if someone has no prizes, no awards, is the work then automatically bad? Maybe she/he did not care about that and he/she is one of those naive people who are still allowed to roam free, even though they think the work should stand for itself.

It should not really matter where I’m from and where I’m going, which relationship I’m in, what my family structures look like, what kind of sexual orientation I have, what kind of training I’ve completed, what political outlook I’m pursuing. What should count is the touch, the impression my words make.

To be unbiased, without any distraction, to accept and form an opinion on myself, that would be what it was about. To be touched, no matter what others think, be concerned and change me. Then nobody needs this autobiographical, falsified and distorting nonsense, if we dare to think and understand ourselves, if we dare to open ourselves to another expression.

But as long as we look at what the critics say, what the environment says, we will remain unreachable for what the work of art wants us to say. Untouchable we hang on to what others say and judge. Thus, the work is meaningless, it is visible only through the external mediation.

I want people who are open and touchable and empathetic, who do not allow themselves to be irritated by appearances, but simply take with them what they consider worthy of their own. Then the work builds a bridge between you and me, leads to dialogue and togetherness. Then art makes sense.