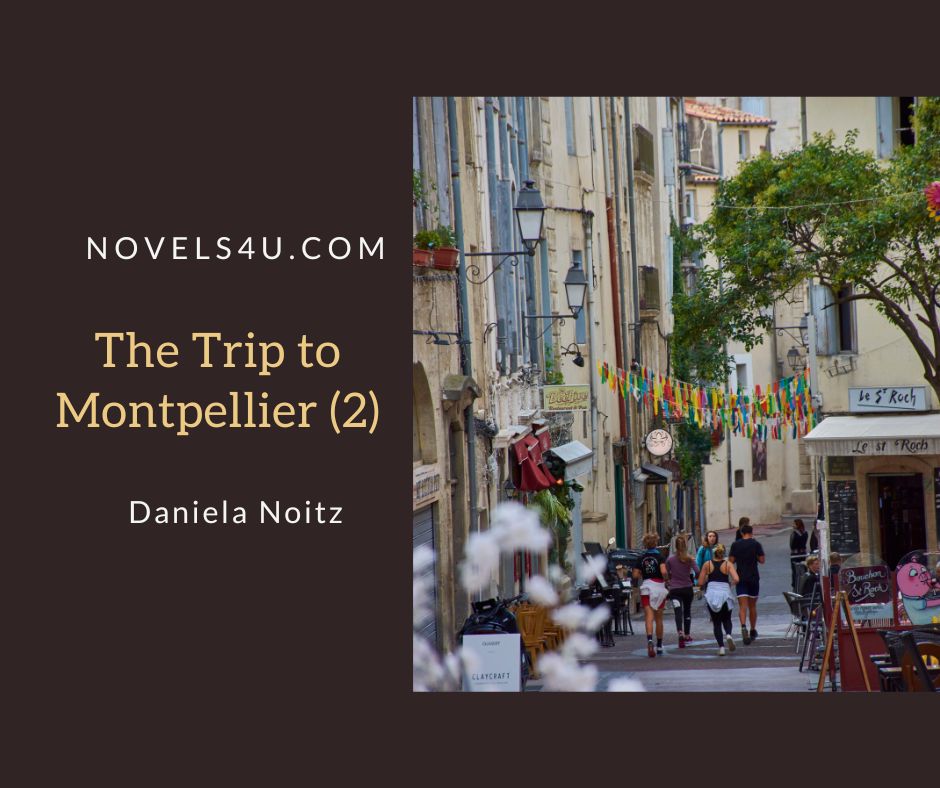 „What happened? How did you get to Montpellier?” Diana asked when Kendra finally called her. „By car,“ she replied succinctly. „What do you mean by car?“ Diana said surprised. „I have a car,“ said Kendra. „Yes, but no driver’s license, so how did you get there and why,“ her mother insisted. „A friend was driving and well, we didn’t have anything better to do at the moment and so we just drove off and suddenly we were there. Now she’s at some party, the tank’s empty and I’m all alone. I don’t know what to do. I am so sorry. I was so stupid,“ Kendra said finally contritely. It took Diana a while to process the information she’d just received, but she wouldn’t have been her if she didn’t have a solution right away. „Fine, I’ll wire you some money and then I’ll get on the train and get you, you and the car,“ Diana declared resolutely. „Oh mom, you are the best. Thank you, thank you, thank you!” Her daughter’s voice reached her ear, “I also swear to you that I will never do anything like this again.” These last words were choked with tears. They must have been tears of relief. And along with the pain came the worry for Diana.

A short time later, Diana was on the train to Montpellier. She had a 21-hour train journey ahead of her. 21 hours in which she would be thrown back on her own thoughts, her desolate inner life, the painful memory of happiness that could have been and the desperate, all-pervasive concern for her daughter, who was so far away from her. How would she find Kendra? Had she gotten the money, and could she live in a boarding house, or would she somehow have to spend the night on the street, on the street in a city she didn’t know, in a country populated by people whose language she didn’t understand? But wasn’t she courageous and prudent at the same time, her daughter?

The journey seemed endless. Diana tried to read, but her thoughts couldn’t be contained. They drifted off again and again, to him who had kept her so warm and safe and who she thought would understand her. At first, he had also shown great interest in her, in her work, in her life. She almost sunk into this earlier, but then the crape of knowledge lay over it again, making her aware that he had only used her as long as no one else was better. But what was better about this other one? Could you even explain something like that, being better with someone you felt attracted to and then coldly and thoughtlessly dumping someone else? No, not even dumped, she could still fill the gap if the other one wasn’t available. A life on hold. There was no way she would get involved in something like that. She didn’t deserve it and didn’t need it. She was aware that she had only been the stopgap. As long as she didn’t know, as long as she still believed in him and his love, she wasn’t to blame, but now that she was aware of it, there was no longer any excuse. She missed him, she had to admit that, but he would never have a place in her life again. She just had to get through this valley of pain and maybe then she would find the person who returned her love and didn’t just use her. That was what she had to focus on, getting through the forest of tears to the sunny glade of joy. She fought for 21 long hours, constantly accompanied by concern for Kendra. Actually, there shouldn’t be anything else, nothing that was more important than bringing her home safely. Finally, the train pulled into Montpellier. She got out resolutely. Her way led her into the large entrance hall. And there she stood, Kendra, her daughter, safe and sound. Diana found herself looking around searchingly. A smile lit her face as she noticed her mother. Seconds later, Diana was able to hug Kendra. It was so good to have her back, so good to be with her, so good that she even forgot her pain.