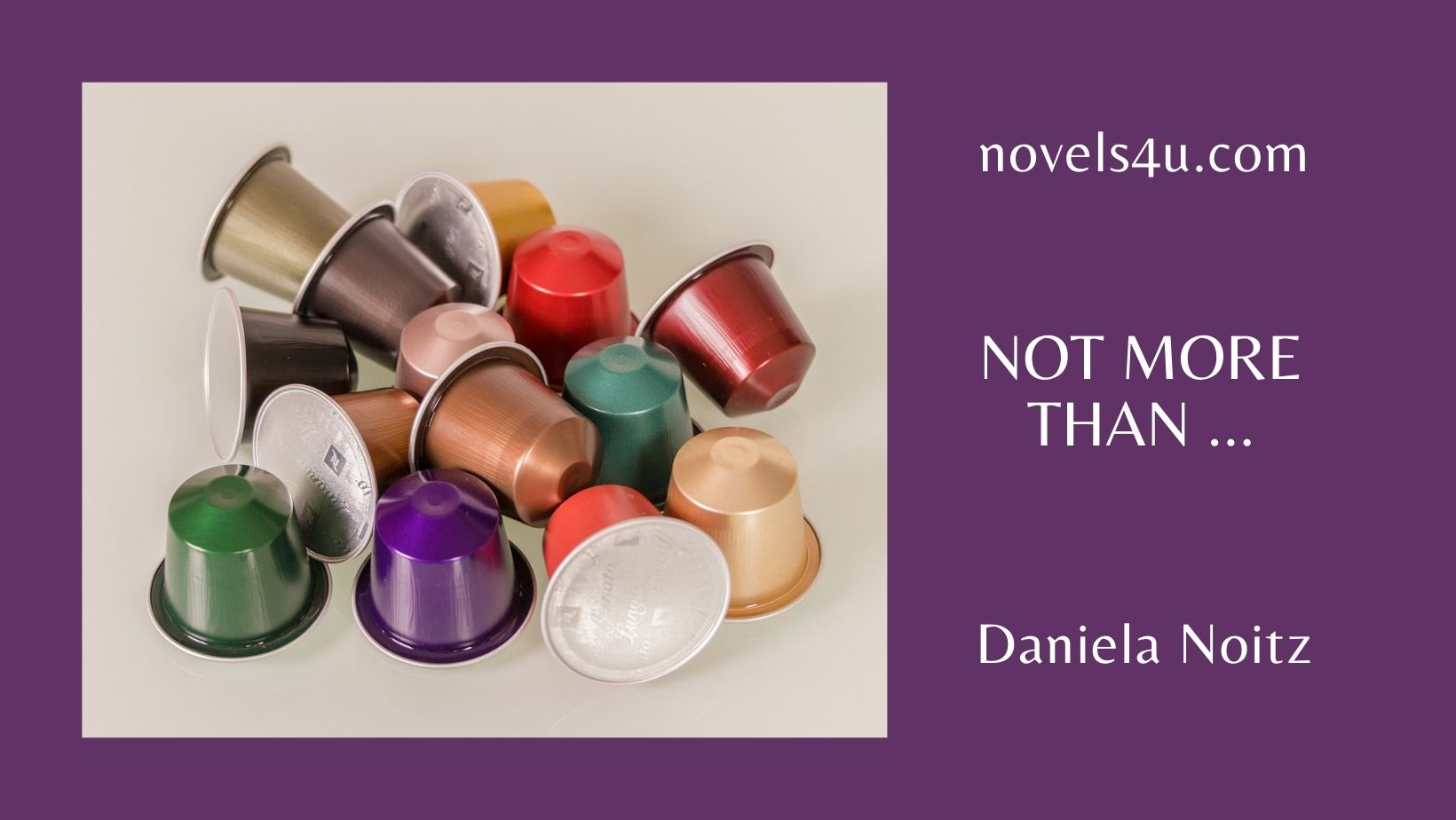 Mathilda dreamily inserted a shiny gold capsule into her Nespresso machine and pressed the button that instructed the machine to prepare an espresso for her. As she watched the coffee trickle into her cup, she thought of George Cluny, who didn’t stop smiling even when his coffee was taken from him. She, Mathilda, couldn’t muster this calmness. No one should dispute her coffee. She heard the capsule plonk into the designated container, then she picked up the cup and carefully brought it to her mouth. Of course, the environment was important to her, but those few aluminum capsules didn’t make the herb fat. If she didn’t, she wouldn’t save the rainforest. Not you anyway. They also didn’t care about the high energy consumption, a broken dam that had spilled toxic slag over several villages and made the Del Nigro a mud pool in which all animals had died but also people were deprived of their drinking water. It all happened far away, and it wasn’t more than human lives.

Mathilda’s apartment was pleasantly air-conditioned, electricity came from the socket and water from the tap. She wasn’t aware of how privileged she was to do these things on her own, because everyone around her felt the same way. After all, the fact that a large part of humanity had to do without this luxury was not their fault. Pensively she added a little milk to her espresso. He was a little too strong. Creamy white milk, expressed from a creature who was constantly being forced pregnant in order to take her baby away as soon as she was born, so they could take away all the milk that was meant for her child. All alone and abandoned, the babies either have to endure in calf pens or they are sent on a long journey to their deaths. The mother’s emaciated, over-stressed body, weakened and hurt, languishes in the barn where she cannot be seen, maintaining the fresh, pure image of her milk, for she is nothing more than a production machine.

Mathilda enjoyed it. Of course, it’s awful, but as a feminist, she had to deal with human women. There’s enough to do there. And dairy cows, after all, were bred by humans to give milk. They also have no bond with their children, certainly not the kind that exists between a human mother and a human child. It’s all just instincts. Had she ever heard the cries of those cow mothers when they desperately called for their baby? Hardly likely. Nor did she want to know how terrible it must be for a mother chicken if her nest is emptied every day, because then she might not like the breakfast egg anymore. She couldn’t allow that, as she preferred to limit the awareness-raising to the effects of patriarchy, because chickens are nothing more than egg-laying machines.

Mathilda spooned her egg and enjoyed her ham sandwich. Nothing could spoil your taste experience. Even if she had been told that mother pigs had to spend their lives lying in tight cages with their children scurrying around them for this little treat, but that she couldn’t have any contact with them herself, she would probably only have smiled tiredly. Also, about the fact that the children in question have to spend their entire life, which lasts six months, on fully slatted floors over their own excrement in a very confined space. It’s nothing more than a piece of meat.

Mathilda glanced at the clock after she finished her breakfast and realized it was time to get dressed. She quickly took a dress out of the box, put it on and took a critical look at herself in the mirror. She must have put on a little fat around her hips. She urgently needs to do something about it. This was a problem that did not affect the children who sewed their clothes. Rather, they had to worry every day whether they would get anything to eat at all. But in the end Mathilda couldn’t take care of everything, since they were no more than a piece of work.

In any case, Mathilda was of the opinion that this child labor was not exploitation, and had even less to do with the patriarchy, but only with the fact that these stupid women spread their legs far too often and brought far too many children into the world. Yes, it was thanks to her that they had anything to eat at all. If she didn’t buy her textiles, they would starve to death. In that sense, she was a thoroughly good, if not charitable, person. But none of that mattered now because she would be speaking at a feminist rally in her city in a few minutes. She would denounce all the injustices that women have been and are being subjected to. And she wouldn’t realize that it’s nothing more than a blah blah.