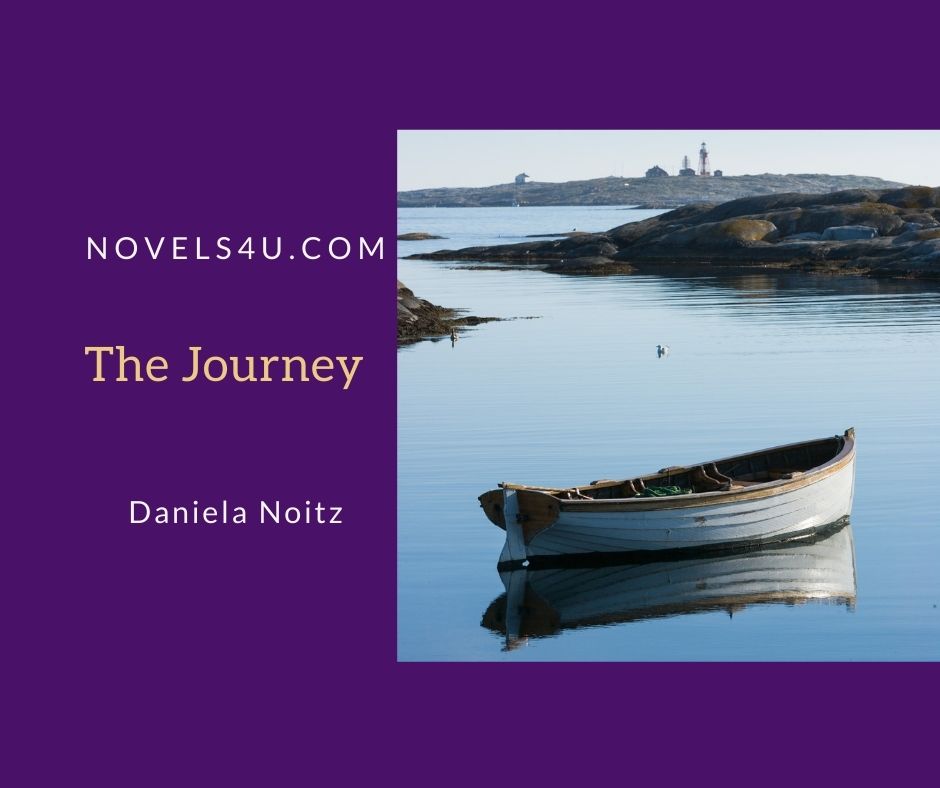 It was a beautiful, clear night with a full moon, that night when I discovered her, leaning against the trunk of the willow tree, very small, very hidden, completely withdrawn. An unsettling calm emanated from her, and since even the willow did not speak, since the wind was still asleep, I simply sat down next to her, next to her, without keeping the distance, without forcing her.

“I’m here because I want to tell you my story, and I’ve heard that this is the place to tell your story, here, in your world, in which nothing is lost and which lives with and from telling, you to tell my story that could expand you and make you grow“, she said without further ado.
“Here is the place, now is the time, and I am there. Tell me – I hear“, I asked her.

“The one to whom I am connected with all of my heart, my whole soul and all of my being said to me one day:

‚We want to be on our way, we want to connect our boats, just as we are connected to each other and let us be led out into the open sea, entrusting ourselves to the wind and waves, just as we entrust ourselves. Wherever they carry us and drive us, there should be our place and our destiny, just as we are destined to be.’

It was a wonderful idea to live and develop together. So, we linked our boats together so that they looked like one, so compact and fused, as if she had never given them individually. With a light breeze and gentle waves, we cast off. Nevertheless, after a very short time we were far out at sea, had left the shore far behind us, and there was nothing else to be seen far and wide. After a very short time? Well, I can’t say for sure, because it was an exhilarating, fulfilling time that doesn’t fit into measure and defies any restriction. Maybe it was only a few minutes. It could just as well have been years. It didn’t matter at all, because time only says something about the extent of the unhappiness and nothing about happiness. The fortunate does not have an hour, but the unfortunate digs itself painfully in every single minute, and we were on the fortune’s side, animated by no other purpose than ourselves, and even that is too much to say, for we were not even deliberate Certainly until that night fell that would change everything.

From one moment to the next the sky was full of black storm clouds. We hadn’t suspected it and didn’t see it coming. Suddenly it was pouring rain and bright lightning flashed through the night, while a heavy storm wind whipped up the waves and tore and tore at the connection of our boats.

How strong was she really? How much would it take, this, our connection? How long would she be able to withstand the forces acting on her?

We held hands in fear and meekly while we had to watch how the connection loosened more and more, how it finally broke and finally our hands slipped away from us, as our boats drifted more and more from each other, with no possibility of stopping it until we lost sight of us, and now everyone had to fight for themselves, through storm, night and rain.” So she told me. And I saw it in front of me, the forlornness and the helplessness, the pain and the humiliation, but did the story really end here?

The full moon remained unmoved, only the wind kept the branches of the willow silent as she continued:

“I called his name, but my words broke with the roar of the wind, were swallowed up by the roar of the storm, were washed away by the clapping of the rain. Despite everything, I called his name because I didn’t want to give up, couldn’t give up. And night fell. Gradually everything stopped, the rain and the storm. Suddenly everything was quiet around me. I tried again to call him, and his name echoed far across the sea, but I got no answer. An almost eerie silence surrounded me, which was more oppressive after the storm had just roared. Was that the deadly silence already? Should he has found his wet grave in the crashing waves? If it were so, I wanted to follow him, since it would have been the only way to still be united with him. But I didn’t know. What if he felt the same way? When the night was over, I would see his boat and we would connect them again. Everything would be the same as before, as if nothing had happened. We would be connected and happy again. At some point I must have fell asleep after all. I couldn’t remember feeling exhausted in any way, just falling asleep, that was certain because I woke up. My hand automatically reached over to you, over to your boat, but it reached into nothing. Maybe I had thought, tried to convince myself, that what had happened was just a terrible nightmare, but it was true, it had really happened. The sun was already in the sky and the sky was bright blue, dull and bleak. I knew I had to take care of myself in order not to succumb to this stupidity and this desolation of not being drawn into it. But where should I get meaning from? Where should I take comfort? My boat drifted, just drifted, and I left it. Neither could I say how long I drifted along like this, let myself drift along, before I reached a bank, any, anywhere. Here, I thought, this is where my journey will end. I began to settle in this here, because if I stayed somewhere, it would be easier for him to find me. Then again, I set off because I suspected that he might have had the same thought and was waiting somewhere to be found by me. In the end I came back to this here. But no matter what I do, whether I want to find or want to be found, I have no clue, not even the smallest, where he is.“

At this point she paused in her narration. Probably because it had arrived in the present. And the wind still silenced the branches, as if listening intently.

“If it is who your soul and whose soul is looking for you, you can stay or go, you will find yourselves, inevitably. Go your way, no matter where it leads you. If it should be, then your paths will cross again. You can neither hasten it nor prevent it – if it is supposed to be, then it will be. You have no influence on it, but you can do something: Keep your eyes open and your heart wide so that you don’t overlook it, when it should be, when it should be“, I told her.

„That’s all? You can’t tell me more?”, she asked, obviously disappointed. „I can’t give you more than hope, and I’ve never promised more,“ I replied.

She went back to her world. It was probably not enough for her.