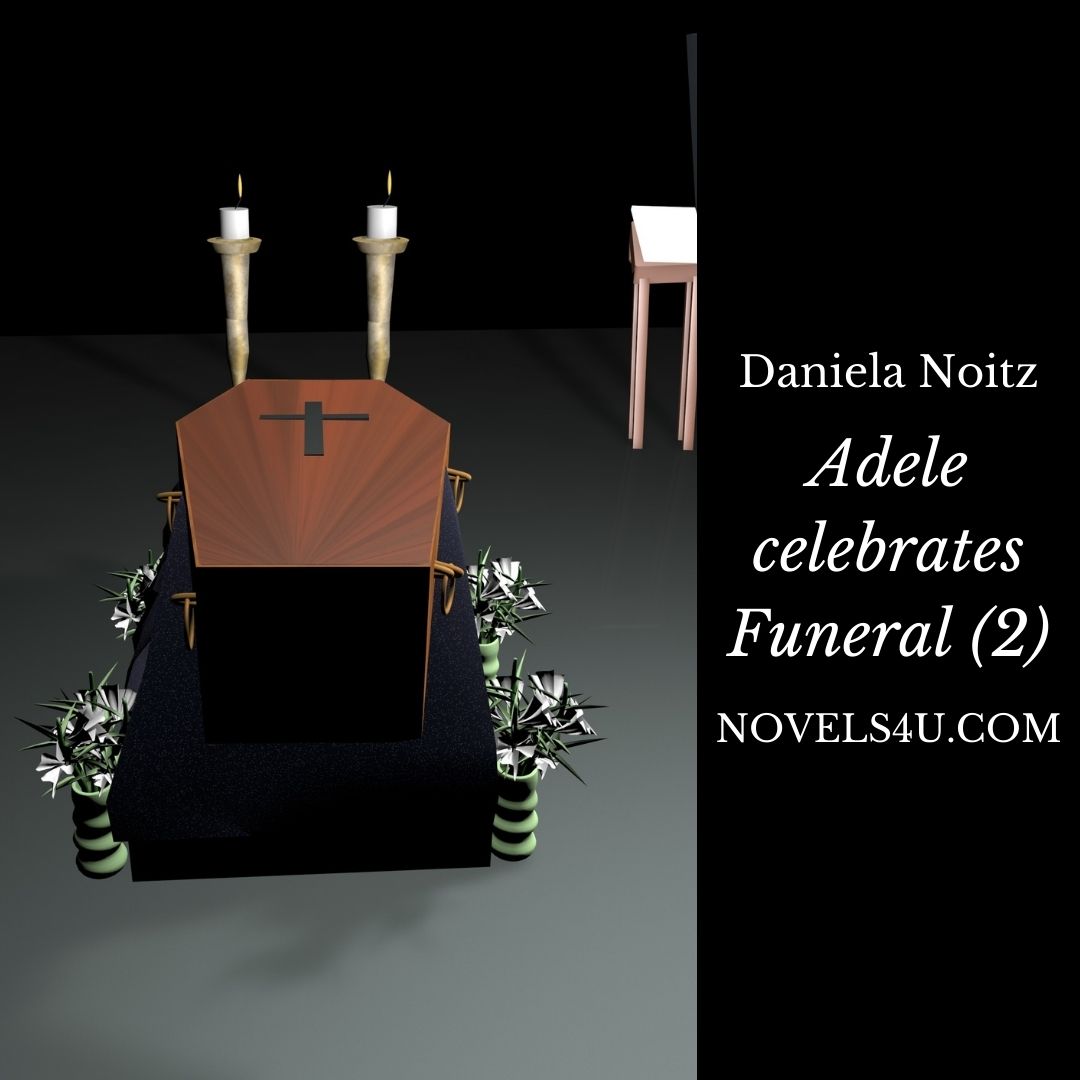 „But you mustn’t open your eyes, because then you won’t look dead,“ said the nice gentleman from the funeral home. Adele thought it over and said to herself that she would only look very carefully when no one else was doing it or when she was not being photographed.

They were all there, and Adele had to admit that they played their roles excellently, first and foremost the grieving husband, then the close friends and above all the close enemies, and last but not least the press. Adele was blessed because one thing was certain, she was the most beautiful undead corpse that had ever been laid out in this chapel. What bothered her was the limited field of vision, but she had been promised that everything would be filmed.

The devotion was brief but heartbreaking. If Adele hadn’t had to pay attention to her make-up and, of course, to her death, she would probably have put out a tear or two. Finally, the lid was closed and the porters took her to the open tomb.

“Does it have to be?”, had Adele asked Reinhard when discussing the ceremony.
„Of course,“ he replied calmly, „After all, it should be a real funeral.“

Yes, and it was. Adele felt how the coffin was slowly lowered into the ground. She groped for her bag doggedly. How could she have forgotten that she suffered from claustrophobia?

Adele lay in the narrow, dark coffin and felt the panic rise inside her. „Where’s that damn box?“, she thought as she rummaged in her bag. The coffin was lowered into the pit. Then he stood still again. How many films she had seen of people buried alive. No matter how different the circumstances, they all had one thing in common, the blood-scratched fingernails. She couldn’t do that, so fresh from the manicure, and why should she? She was taken out again, definitely taken out again. From a distance, words full of anointing reached her ear. Finally, she found the pill box, opened it and felt around inside. One was still there, one only. She hastily shoved it into her mouth while small shovels of earth were thrown onto her coffin outside. As she grew calmer and calmer, the noise and everyone else went away until she could no longer hear anything.

“Maybe it was a little exaggerated, a little too realistic,” said Reinhard thoughtfully when the coffin had been opened again and Adele was lying in it with her eyes closed and no longer responding.
„Did she fall asleep?“, asked Amanda, who had also leaned over the coffin.
“Can you fall asleep under such circumstances?”, asked Reinhard sarcastically, “but maybe she took one of her little pills to calm down.” But there was no pulse, no breath that would have lifted her chest. Even the doctor, who was called immediately, could only determine the death, so that it was a real funeral after all, and more or less real tears out of the wrong.
„How could that have happened?“ Amanda wondered.

Three days later Reinhard was driving towards Monaco and he was not alone.
„Now you’ve finally managed to get rid of her“, Amanda said happily, „After all these years it was so easy, although I don’t know how you did it, that she really died.“
„Oh, it wasn’t difficult,“ said Reinhard with a smile, „one thing just fit into the other.“
„But how did you do it, especially so that nobody was suspicious?“, Amanda persisted, and Reinhard had to admit that he felt flattered by so much attention for his work.
„Well, you know that whenever she got upset, she reached for her tranquilizers. Our GP was happy to confirm that she was addicted to the stuff. Now my heart tablets look very similar to their tablets, and they were always next to each other in the bathroom. The last time she put a pill in the box, I guess she got the wrong one. In the dark she couldn’t tell apart anyway, and that was enough,” Reinhard explained thoughtfully.
„When you see it that way, you really can’t help it, you haven’t done anything,“ said Amanda. “That’s exactly how it is,” confirmed Reinhard.
„That was just fate, or maybe the punishment for anticipating things that are not yet ripe,“ noted Amanda, „although it has its good points.“
“It did, and it couldn’t have been more convenient, but I think we shouldn’t go to the casino in Monaco,” said Reinhard.
„Because with so much luck in love, we can only lose in the casino,“ added Amanda, laughing as she let the wind blow through her hair. How beautiful life could be.