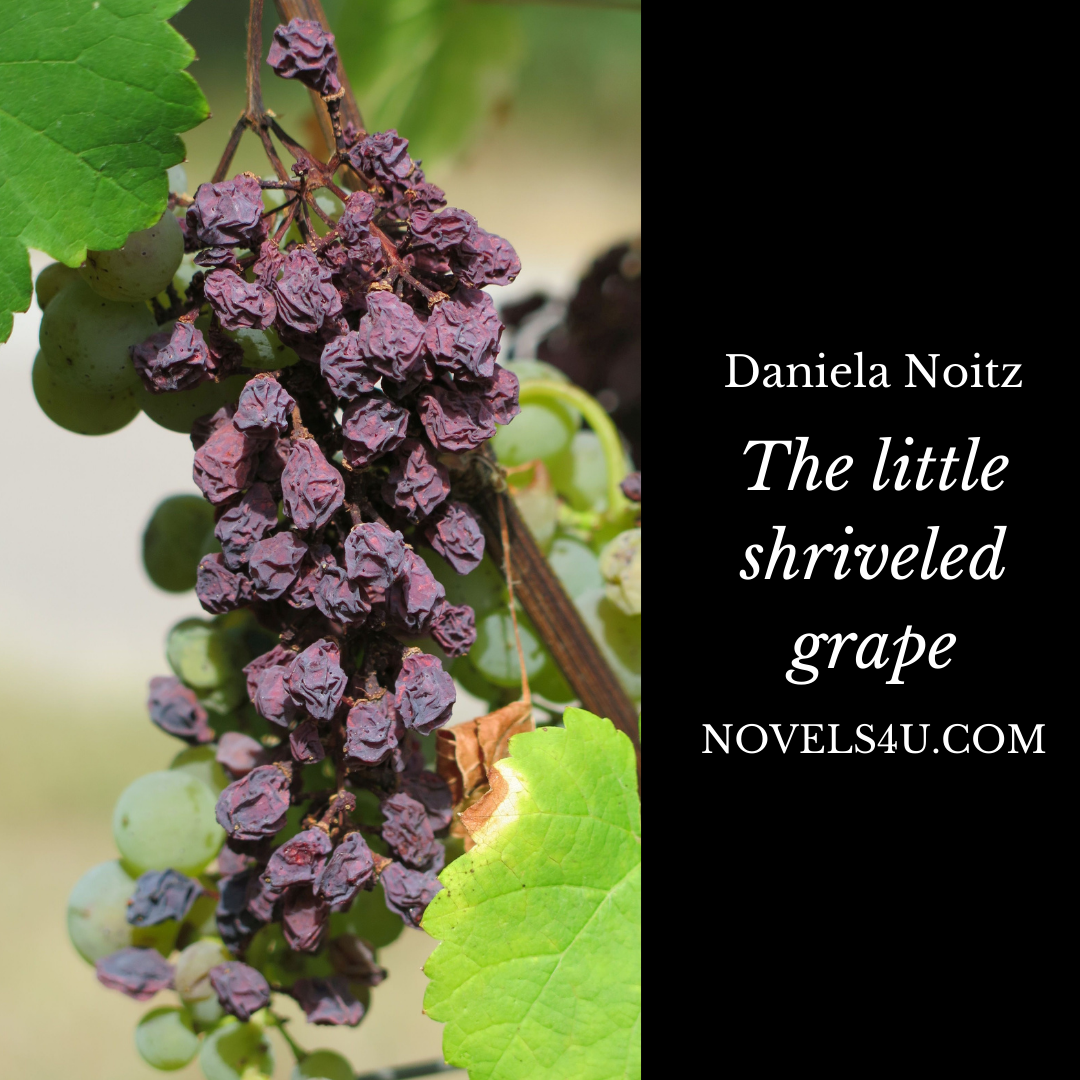 “You are a little raisin. You look like you are very cute, but cold.“

“Small, shriveled grapes are called raisins. It is the custom all over the country, up and down the country. Ask who you want everyone will say that you are a raisin.“

“I would be a raisin if I were not here by the vine, but in a packet with many other raisins, to be eaten in order to still have some use. But as long as I hang here I am a grape, albeit a forgotten one, as I am slowly inclined to believe. Many have already told me, but I didn’t want to believe it.“

“You say that. You pass here, do not even know whether you are awake or dreaming, and you want to make me illusions. You probably think so too, uh, she looks horrible. I don’t want to attack them.“

„It doesn’t have to be me either, because I don’t like raisins, but if someone comes who likes raisins, they’ll pick you.“

“I’ve grown, here on the stick, and the farmer came and looked at us all. To me, especially to me, he said that I would become one of the most beautiful among all the grapes, and that spurred me on. I became one of the most beautiful, greatest of all. I grew up all summer. Many of the grapes were stolen, some before they were even ripe, but not me. I hung too high up for the small animals and people, and I hid behind the leaves from the big people and birds. I wanted to be harvested by the farmer. Maybe then everyone else would come into the press, just me, he would take me to himself – whatever that means, because I’m the most beautiful. And then came the day of harvest. Most of them were picked, but for me he said he wanted to wait because I was going to be even more beautiful. He came three times and reaped, but each time I got stuck and eventually I was the last. The sun came out less and less and the cold came and I stayed. My skin lost its smoothness and the moisture escaped, so that I slowly but surely dried up. Summer came again and dried me out completely, and that’s how I am as you see me here. Three winters have passed and I am still hanging. I’m beginning to believe it too; the farmer doesn’t want me anymore. He just forgot that I was once the most beautiful.“

“Well, nothing more can be seen of that. Now you are the only one, shriveled, old and forgotten.“

“But I held back and saved myself for the moment when he would come for me. I was stingy with me and gave nothing, and now, now nobody wants me anymore.“

“If you hadn’t hidden what you had to give, at least one of them would have had something from it. But now nobody benefits from it. Now you are just a dried-up raisin of no value. “ „Now I am a dried-up grape, drained and shriveled, not even suitable for a muesli.“

„And the farmer comes in the spring and sees the young shoots and the promising grapes, and he won’t see me anymore.“