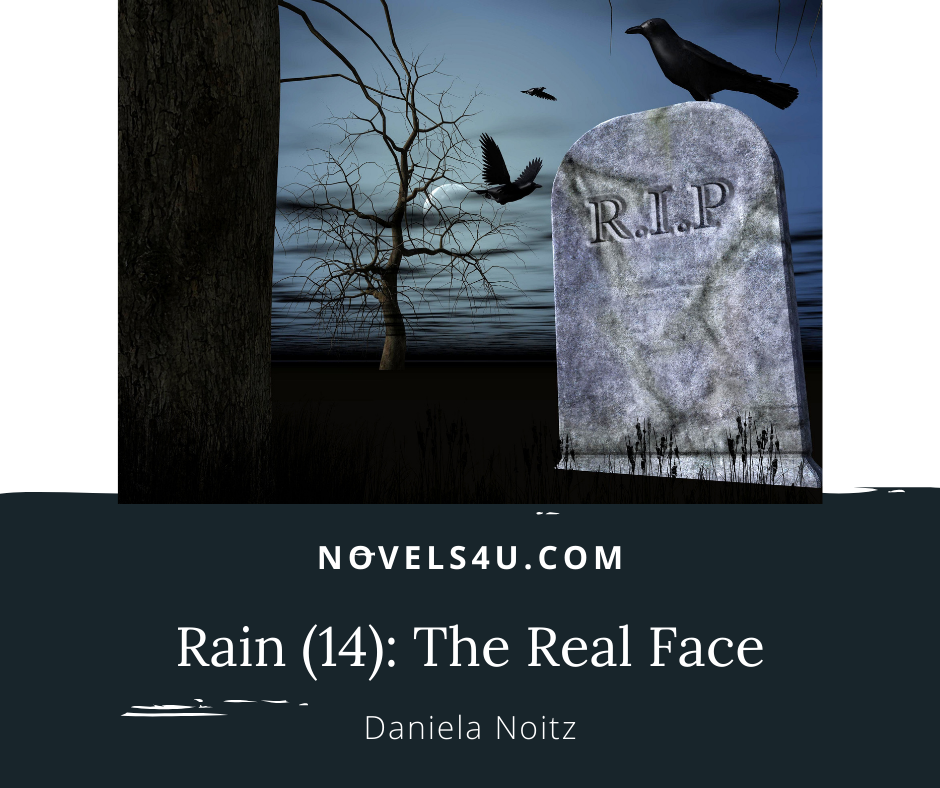 You stayed for a long time in this silence that I did not dare to break. It was as if you had to draw strength to be able to tell further.

“Aunt Morgana had hit me so unlucky with the poker that I passed out. I woke up because I was cold. A rough wind blew up there on the highest point of the tower where they had taken me, but not only I had been carried, Aunt Morgana too, because she was not in her wheelchair, but on a normal chair. I was huddled on the floor. When I tried to straighten up, the pain in my head immediately depressed me again. ‘You will choose to commit suicide, we have decided, your uncle Ernst and I, to protect our son from you,’ she said unmoved.

I knew I had to come up with something quickly, very quickly if I wanted to avoid this fate, i.e. above all, I had to buy time. ‚But before I die, I want to know one more thing,‘ I said as calmly as I could: ‚Speak, my child, because everything you will find out now will accompany you to your grave,‘ said Aunt Morgana generously. ‚Why are you sitting in this wheelchair?‘ I asked seemingly unmoved. ‚Can you even cope with that, you with your little life and your narrow thinking?‘ She replied mockingly, ‚But as you like, you should learn the truth, even if it does not make you free, but leads you to death. So many, many years ago, we weren’t married then, but it was in prospect. I could still walk and see Ernst. I would never have thought of binding myself. I guess it made me happy when he was there, because he had his own way of courting me and I enjoyed his attention, even if I was rough. That went on for weeks and months …’ ‘For more than a year,’ put in Uncle Ernst. ‚As far as I am concerned, it should have been over a year,‘ said Aunt Morgana briefly, ‚Then it happened on a wonderful, star-flooded summer night. I had danced for hours. I wanted to be a little alone and, above all, to get some fresh air, because it was smoky and stuffy in the ballroom. I could have just walked out into the courtyard. Instead, however, I climbed the tower, but I wasn’t up there alone, I found a couple hugging each other. When I stepped behind them I realized who it was, your uncle Ernst and a girl who at the time was still pretending to be my friend. ‚Never again will I allow myself to be humiliated by her like all the other Dandies down there. She will never again embarrass me in front of anyone. Tonight, we want to go away and leave this place behind us forever. Is that what you want?’ I heard him say. ‚Yes, I want that!‘ She replied. The two were obviously so absorbed in each other that they didn’t even notice that I was standing behind them. Blind anger seized me. ‚No one will ever leave me, never!‘ I yelled at her and pounced on the girl who was standing close to the parapet. It was probably no more than a push, but it was enough for her to fall over the parapet, to her death. Ernst had grabbed my waist, but it was too late. A scuffle broke out in which I scratched his eyes out, but he, in a cry of pain, pushed me away and down the stairs. Since then he has been blind and I am paralyzed. That was what welded us together, more than the priest’s words.’, And I began to understand.“
A sigh escaped her tortured soul.