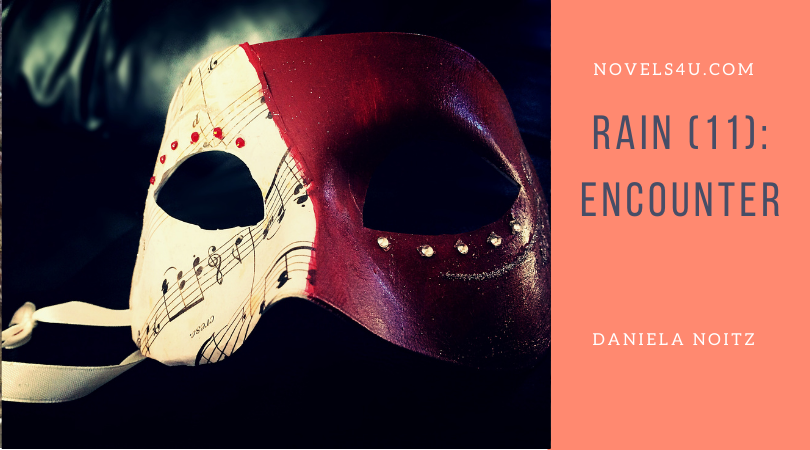 „Did you see that I built a roof for us, there next to the pasture, where we can hide if we want?“ I greeted you the next rainy night, and you wanted to, came to me under the roof and continued your story away.

“The ravens fluttered around me restlessly, but I wasn’t impressed. I was too preoccupied with the coming events. Of course, I was scared. I kept thinking of the poor girl who had thrown herself to death. Soon I could be lying next to her, only I could no longer save her, not even help her or make her fate easier. But there was also the possibility that I was the way out for Mochridhe. That was my hope. So, I sat, waiting for the night, wavering between fear and hope. But there was something else, curiosity. What can someone look like who takes a girl so far that she no longer wants to live? I couldn’t imagine. What should be so special about him? And why did I believe him? Maybe he just made up everything to lure me to him, so that he could rape me and then throw me from the tower. ‚No, he doesn’t,‘ said one of the ravens in my head. ‚Damn it, can you read my mind now?‘ I replied angrily. ‚We’ve been able to do that all along. We just didn’t want to interfere until now, but now it’s enough. You can trust him, or at least that part of the story. We don’t like the fact that you intend to see him, but we mustn’t hold you back either, because you have to act as you see fit, even if you run into your doom with open eyes,‘ I heard now the voice of the other raven in my head. ‚What do you mean to say to me, in my destruction? Say what you know!’ I asked, but suddenly a key was put in the door, turned and unlocked. Someone entered softly, a figure I could only see the outline of. Then the door was locked again. I got up slowly and walked towards the figure. She wore a mask that covered her entire face. Only the eyes and the mouth were free. His dark hair fell to his shoulders. My heart was pounding. I couldn’t find a word that was appropriate, and he too remained silent, but I could still use my hands. So, I felt the mask and found a way to open it, which I also took. Take a deep breath, then I took off the mask. I don’t know if it was the darkness or just me, but I saw a young man with delicate features. Yes, he was beautiful, but I also felt his loss, his pain and his despair, so that I did not run the risk of standing on a pedestal and worshiping him. He was a person like me who deserved my attention and compassion, but I didn’t get the impression that I couldn’t break away. My heart stayed free. I could still choose to stay or leave. ‚I’m glad you came,‘ I said calmly. ‚I’m glad you invited me, Morrigan. Actually, I would have imagined you to be completely different, much older. Your voice, your thoughts sound so mature,’ said Mochridhe, surprised. ‚So now I’m too young for you. You see me for the first time in your life and something is not right for you. That can still be cheerful,’ I replied teasingly. ‚I didn’t mean it that way,‘ he said timidly, but it’s nice to see you laugh,‘ he relented. And that’s when I noticed it too. For the first time since that night I could laugh, or at least smile. For the first time since that night there was a place where I felt comfortable, someone I felt comfortable with.“

And you stayed even when the rain had gone You fell asleep in my arms. I allowed it.