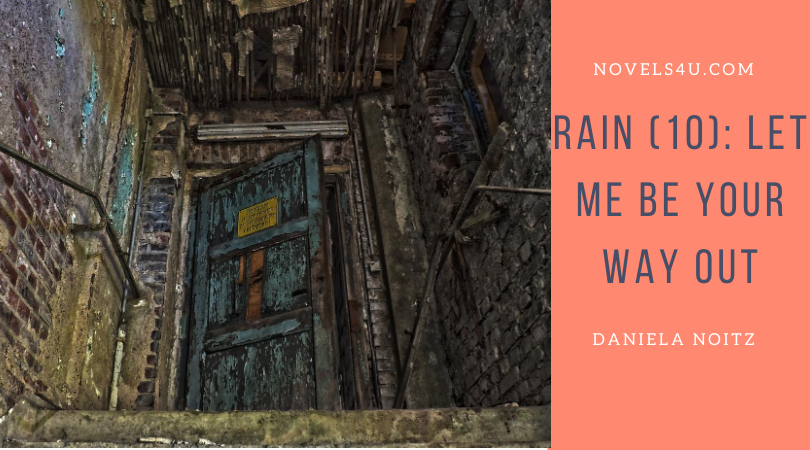 You had left the rain behind you and came the next night even though the sun had dried everything up. I didn’t ask for an explanation, just glad you were there to continue.

„The words kept going through my head:

But you find in one
a heart that did not succumb
redemption is near.

I kept thinking about the pros and cons. But above all I saw sitting up there, who was so beautiful that people with skin and hair, mind and soul fell for him, that they could no longer find their way upright and alone. If no one came, I thought, he would have to stay up there for the rest of his life and it would have been wasted. On the other hand, who was to be exposed to this danger? Someone whose life is over anyway, who is alive and dead, someone like me, I thought. If I were not able to let myself be completely absorbed, I would have saved him and everything would be fine. He would get his life back, could be free and independent, and I would have done something good again, at least would have given his life back to someone else, because I saw mine as irrevocable. So, what did I really have to lose? Actually, I could only gain, namely the strength to put an end to my life, this miserable existence that I had to eke out. And at least I had the opportunity to save another life. If I should manage to touch his heart, at least he would be saved. Perhaps, I also hoped secretly, he could help me over my pain, we were in a similar situation. I was determined, so I knocked gently by the fireplace. ‚Morrigan?‘ Came a question through the fireplace. ‚Yes, it’s me, and I want to know if I am the one who can be your way out,‘ I said frankly. ‚I don’t know if I can let that happen,‘ he replied, and with his work I could hear the ravens cawing and the wolves howling as if they agreed with him, as if they wanted to tell me not to do it , but I really wanted to. Determined not to let anything or anyone stop me from my project, I explained my thoughts to Mochridhe. The ravens croaked wilder and wilder and the wolves howled louder and louder. I looked them in the eye, these two ravens, and there was something like recognition, but I shook it off because that couldn’t be, just couldn’t be. So, I tucked my knowledge somewhere far back in my mind. ‚Mochridhe‘, I said slowly, emphasizing every word as if it were a sacred oath that I took, ‚I will dare, absolutely.‘ ‚But I’m afraid for you. There are already so many who I have to mourn, so many who died because of me, or at least they were mad, I don’t want any more victims. I don’t know if I could take it,’ he replied, and I could feel her, his fear and his concern. ‚You don’t even know me,‘ I reminded him, but he refused to accept it. ‚It may be that we’ve never met, that we’ve never met each other’s eyes or shook hands, but it still feels like I’ve known you for a long time, whatever that means. I do not want to lose you. Even if I have to stay in this tower forever, you still have the opportunity to talk to me, even if you are free, you can come back and talk to me. This is the last thing I have and I don’t want to lose that too,’ he replied, and the objection was weighty. ‚But you said it was a good sign that I resisted your mother. I think I can do it. What kind of life it has been for decades, in a tower and always waiting for someone to come just to exchange a few words. That can, that shouldn’t be enough for you,’ I interjected, glad that it occurred to me. ‚Well,‘ he said, ‚Tonight I will ask my father to bring you to me.‘ And I waited for the things that would come.“
So you left me, but soon I would know, soon the rain would come again and you with it.