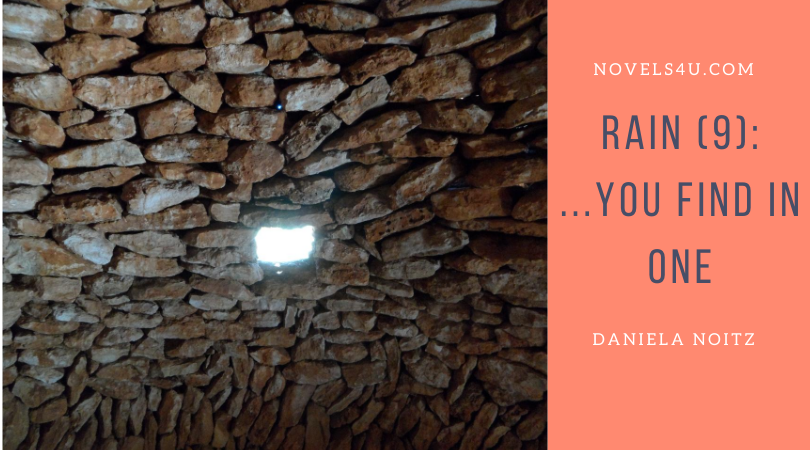 It fell on the jetty, crackling and heavy, the rain. I suggested we sit under the weeping willow, at least that. She agreed.

“A soft knock woke me up. My head ached and my back, but my curiosity was greater than the pain, so I sat and listened. Was there another knock, or was it just imagining it? No, there it was again. ‚Mochridhe‘, I said timidly, ‚Are you there? Can you talk to me?’ ‘Yes, I’m here. My father spent the night with me. It seems as if he is fleeing my mother, but now I’m alone again.’ ‘Then tell me what way out there is!’ I asked. ‚You remember the poem she said over and over, the girl who threw herself from the tower?

My heart was mine
until that day
since i saw you
Now it’s yours
do not know what it was
what happened to me. ’,

he asked, and it seemed evasive. ‚Yes, I remember,‘ I replied impatiently. ‚It could go on like this:

But you find in one
a heart that did not succumb
redemption is near.

This is the key, the redemption and also the danger,’ he added cryptically. ‚If I understand correctly, you only have to find a girl who does not succumb to you, but who comes to a real togetherness?‘ I asked carefully. ‘You got it. I knew you would understand, right from the start,‘ he said softly, as if it weren’t true, but just a sentence that he had practiced for so long in case he could ever say it, even though he hoped had already given up. ‚You must never give up hope,‘ I rushed forward when there was the picture again, the burning house, and I had to admit to myself that there was a point where you had to give up all hope because there was nothing left was as death and end, but I kept that to myself, because after all it was only for me. As before, I thought that it couldn’t be that difficult to find someone who was not helplessly at the mercy of their beauty, when the thought struck me: ‚I want to try it. I want to see if I can be the way out for you.’ ‘No, I won’t allow that!’ Mochridhe replied firmly, ‘You have been the first person I can talk to for such a long time. I don’t want to lose you right now.’ ‘But why? Do you want to stay up there forever? What do I have to lose? My family is dead. Wouldn’t it be nice to be able to follow them after I had the privilege of having some happy moments? In the end I can only win, at least my redemption, but it can also be that we both redeem each other,’ I tried to point out. ‚Let me think about it,‘ he said, and now he seemed to draw a little hope, ‚Just tell me one more thing: How was your meeting with my mother?‘ ‚Not very spectacular. However, I didn’t feel attracted to her, rather I felt cold around her,’ I answered truthfully. ‚That’s a good sign,‘ he said slowly, apparently weighing every word, ‚Still, take your time. It is still soon enough for perdition, as it is for redemption. You have to be aware of the possible consequences, otherwise I won’t even get involved. I don’t want to inflict pain on anyone anymore.’ ‘Do you think there is any pain in this world that is greater than the one I go through every day?’ I asked mockingly. ‚But there is,‘ he explained dryly. ‘Then I want to see him eradicate the first one,’ I replied, and I heard him get up and walk away from the fireplace.“
Hadn’t you noticed, it had stopped raining, only the air still smelled of rain. You left too late.