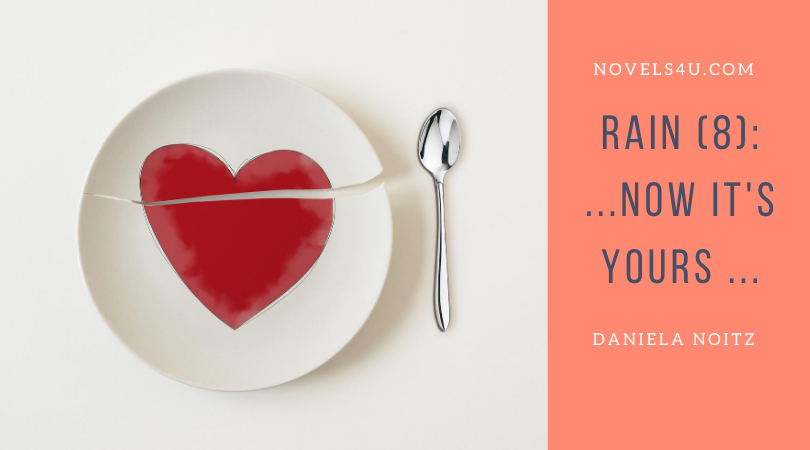 “What madness! It couldn’t be that one person falls for another in such a way that he can no longer be, that he would rather throw himself to his death than continue to live without this person, and that only because of a ridiculous externality. Beauty? That’ll be over. Does it matter anyway? Maybe, but it should only be marginal, because how quickly something like beauty goes by, apart from the fact that it is judged a little differently by everyone. But then I remembered the images of screaming girls who would faint at the sight of some guy and do more crazy things. Was it really that crazy? ‚You don’t believe me,‘ came Mochridhe’s voice from above. ‚That would be said too much,‘ I replied diplomatically, ‚I find it difficult to imagine.‘ ‚I can understand that well. Who knows, maybe I wouldn’t believe this story myself if it weren’t for mine. Yeah, I wish I didn’t have to believe her because then it wouldn’t be mine,’ he noted. ‚And after this happened, did your mother lock you in the tower to prevent something like that from happening again?‘ I tried to get back to our real topic. ‚Far from it,‘ Mochridhe replied quickly, and I thought I could see something like a laugh that was full of malice and bitterness, but I may have been wrong. What was there to laugh about? ‚My mother was delighted with this incident, so delightfully that the very next day she brought me another girl who had the same fate as the first. We were happy together for a few months, but it passed all too quickly. So I immediately had the lives of four girls on my conscience. Maybe I initially agreed with my mother and saw it as a game that regularly cost a human life, but gradually I became aware of what I was doing there. After all, they weren’t dolls that you played with and carelessly threw away after a time when you no longer like them, but living, feeling people. I knew it was wrong, and yet I had become addicted to being admired and loved in this way,’ he said, and a deep horror seized me. ‘So, I asked my father to lock me in this tower and to put on this mask as an additional security measure, which I cannot open myself,’ he concluded his report. ‚But you can’t stay up there forever,‘ I said, ‚Is there no way out, no hope?‘ ‚Yes, there would be a way out, a hope,‘ he replied. ‚And what does this way out look like?‘ I asked quickly. But I got no more answer. I could still hear the creaking of the door above me, wild rumbling, soft, hissing sounds, then silence again. Apparently, the food had been brought to him, but the one who brought it seemed to be lingering. And I was dying to learn more, but apparently, I had to be patient. But how long? The two ravens sat silently on the bedpost and the wind brought the wailing howl of the wolves to me. What did that mean? Did it mean something? I stayed seated and made sure that the creaking of the door would repeat itself, that Mochridhe would be alone again and could finally tell me what to do. But the sound didn’t come. There was nothing but the howling of wolves. At some point I fell asleep on the floor next to the fireplace. ‚Mochridhe, that means my heart. How fitting!’, It ran through my head.“
And you owed me the answer, too, until the next night, because the rain stayed.