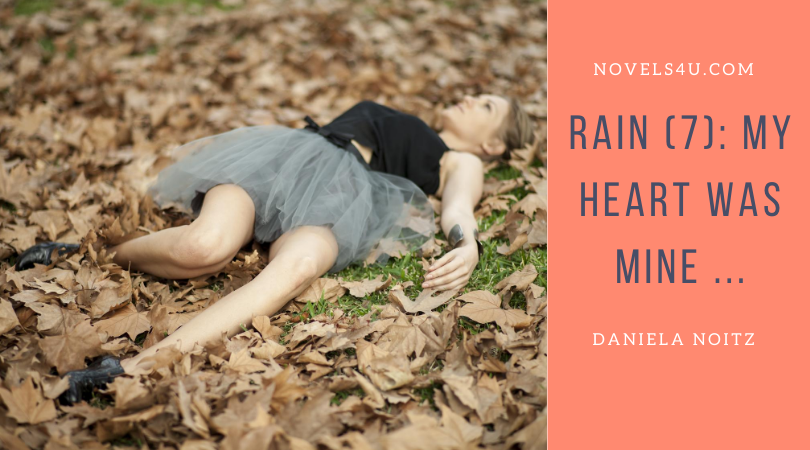 In all attempts to hold you my hand was empty. Nobody can be held, you can only stay on your own, and yet you too were driven to me when the rain came to find a place to tell. Didn’t you have anyone else?

„I couldn’t imagine what he meant, the ‚curse of beauty‘. Of course, there was such a thing in people that we used to call beautiful, but who knows what that might be. If you asked what was so beautiful about a person, no one could answer in a way that could be called satisfactory. There are no fixed, universally valid criteria for beauty, as there are for certain other diseases. But what makes such people stand out from others? What makes them so special? And the one above me who claimed to be not only beautiful, but so beautiful that everyone allegedly fell for him and could not get away from him. ‚Morrigan? Are you there? Or are you just imagination?’, I now heard a voice from above that had put away all pain and now sounded as gentle as a lullaby. ‚Yes, I’m still there,‘ I answered quietly, letting the voice encircle me. ‚Would you like to go on?‘ I asked after a few moments of silence. ‚If that’s what you want …‘ he agreed, and then he continued, ‚I don’t know how long it was, because up here in the tower any time loses its meaning, first flowing day into night, days into one another, then weeks Months until they become a tough, sticky dough. All one. Sometimes it’s cold, sometimes it’s warm. Sometimes it’s dry, sometimes it’s damp. Otherwise nothing changes. I grew up in this castle and shied away from the world outside the forest. What did I have to do with her when I had everything here that enriched my life? One day a young girl got lost in our forest, and as if that wasn’t enough, a terrible storm also fell that day. Completely frozen and soaked, she knocked on us. I hadn’t seen anyone but my parents, and when she stood there she looked like an angel with her long, golden hair. I wanted to own it, make it my property. What’s more, I wanted her to never let go of me. And so, it happened. With all of her being she fell in love with me, could no longer live, no longer think, no longer breathe without me, and I was happy to put up with her. There seemed to be nothing in the world for her but me. I was her world. At first, I thought myself happy, but gradually I got tired of her. The constant attention, the constant care got on my nerves, so that I sent her away because I had the feeling that I had to suffocate under the harsh grip of her love. I had to admit that I didn’t feel anything for her, nothing that resembled her feelings for me. Like a hunter, I seemed tired of it as soon as he held the trophy, and in my case it wasn’t antlers but a living, beating human heart.

My heart was mine
until that day
since i saw you
Now it’s yours
do not know what it was
what happened to me.

So she said when she was walking, on the day I sent her away, up to the tallest tower, from which she fell. I picked it up, this dead body, but I didn’t even find pity any more, only disgust. So, I turned away. Dead body next to dead leaves. The worms would take care of them. However, I was infected. I was eager to have someone again, to make someone dependent on me, then that was the only way to feel alive.’ At that point he paused. I got cold, so cold, and yet I wasn’t sure what to believe about it.“
And at the end of the rain and the telling, as always, was your leaving.