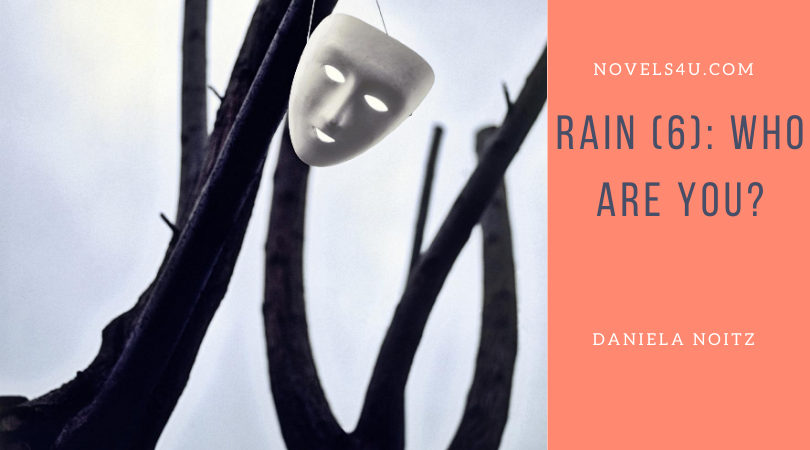 It was always the same picture. How do you endure always being in the rain? Little by little I froze more and more, but my desire to hear more was greater than my ever-increasing unwillingness to face the rain. And you came reliably with the rain.

“I was lying in my bed and had to listen to it, the raging and wailing, had to listen to it and suffered with it. How long did he rage over there above me? I couldn’t tell without a clock, without a clue, because the window was too small to see the position of the moon. Even the moon was of no help to me. It was as if the whole world had denied itself to me, and the one that was left to me was devoured in the image of the fire, but as much as it cut to my heart, the lamentation was probably my salvation too. I began to feel life in me again, which arose with the desire to be there for those who writhed, tormented by a deep pain. Be there, maybe even help. But how should I get to him? How should I contact him? It was a bright night, calm and invigorating, actually. The ravens sat by my bed, their beak hidden under the wing, asleep. Enviable, this calm and poise. When I slept, it was only when exhaustion overwhelmed me, when the body demanded its rights, with all clarity. ‚Who sleeps does not love‘, it shot through my head. ‚And whoever doesn’t sleep doesn’t love because they die,‘ added my head. But I wanted to go up there, wanted to know. But how should I do it? Then my eyes fell on the ravens again. ‚You have to wake up,‘ I commanded urgently, ‚wake up and fly up there. Tell me what’s going on. ‚ And immediately they took off as if they had just been waiting for my order. ‚There’s a human up there, maybe a man,‘ reported the first raven when they returned. ‚It’s not clear because he’s wearing a mask. He lies on the bed and squirms as if in terrible pain. We told him that you were there, that you wanted to talk to him.‘ ‚And what did he answer?‘ I asked impatiently. ‚He only said one word: fireplace. Nothing more could be got out of him,‘ said the first raven. ‚Fireplace‘, it shot through my head and my eyes searched the walls feverishly. I finally discovered it, the fireplace. Nothing more than a small, dark opening indicated it. I walked slowly towards it. There was no fire. I called up, and indeed, a weak voice answered, timidly. ‚Hello?‘ It came down to me questioningly, marked by exhaustion. ‚Tell me about your pain,‘ I invited him. ‚I want to do that if you tell me beforehand who you are and what you are doing here,‘ it came back slowly. ‚I am Morrigan, the niece of the castle mistress. I lost everything last night and then she locked me up here,‘ I answered hastily. ‚And I am Mochridhe, her son,‘ it rang out back. ‚Her own son, locked up in this tower, and if that’s not enough, with a mask too!‘ I replied, startled. ‚How do you know? Did she tell you? ‚He asked confused. ‚No, not a word,‘ I said quickly, ‚my ravens reported it to me. But now tell me your story.‘ ‚I have promised it. Now I have to redeem it. It all started in the year when I changed from youth to man. If my mother is beautiful, I am even more beautiful. If her voice is beguiling, mine is even more beguiling. Everything that she has to offer in terms of sensual benefits is even more pronounced with me. And if someone who saw her heard her speak, saw her move, and could never forget her again, it was no longer possible for the people who saw me to live without me. That’s the curse of beauty,‘ he said with a sigh.“
„Stay here,“ I tried to hold you as the rain went, but you weren’t ready, not yet.