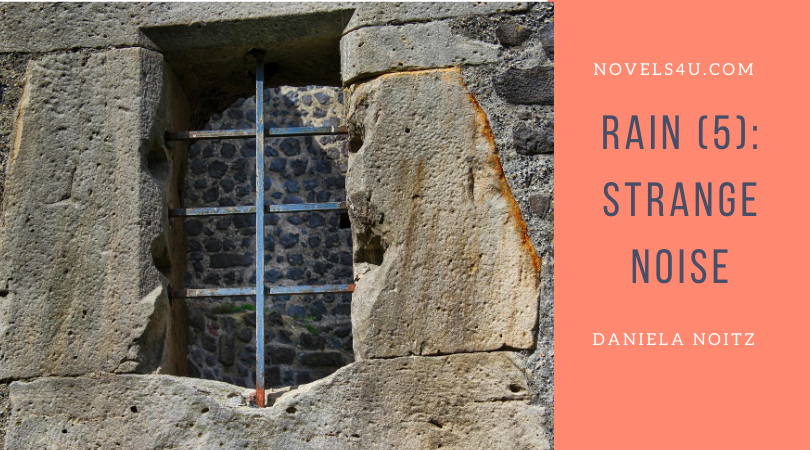 It was a long time coming, the next rain that should bring you to me, weeks of drought, but so much was left open. What happened to you next, locked alone and abandoned in this tower room?

“I felt my way through the small room and found a bed on which I let myself fall. I was graciously enveloped by tiredness and sleep that remained dreamless. I woke up when the sun shyly sent its rays through the small tower window. Now I could see the room too. A bed, a table, a chair. There was nothing more in it. There was a tray by the door. Apparently, someone had thought that I had to eat, but I decided not to eat and just lay there until something happened. ‚You have to eat,‘ I suddenly heard a familiar, croaking voice in my head. They had come in suddenly through the window, my companions since that night. ‚You have to stay strong,‘ croaked the other in my head. ‚And what for? I lost everything to be locked in here now. Why should I go on living? Why should I stay strong?’ I hurled at them. ‘She really doesn’t know anything,’ the one raven croaked in my head and shook his feathers wildly. ‚But actually, she is not to be blamed. You never told her anything either. How should she know anything, poor girl,’ came the croak in my head from the other raven. ‚Now listen to Morrigan, you have been chosen to save the lives of at least four people and uncover a terrible truth. Nothing can be kept hidden, no matter how many years ago or how safe the guilty feel. It must be atoned for,’ said that raven to me. ‚And should I do all of this, here in the tower room?‘ I asked without harboring the slightest hope. ‚You will find out soon enough,’ began the first raven again, ‚But now you have to eat.‘ And I ate. Maybe because I was starting to get hope again, in the middle of a situation that couldn’t be more hopeless, but on the other hand, that’s exactly why it could only get better, and it was true, I couldn’t just let that happen to me. The ravens stayed with me and I no longer felt so abandoned. They told me about the forest that surrounded us, about the wolves that went with them and the pain of being so despised by people just because they weren’t as beautiful or could sing as enchantingly as other birds.’ ‘People are always guided only by their appearance,’ said one raven in conclusion. ‚But that’s not all,‘ added the other, ‚Not only do they call us ugly, they also blame us for all kinds of misfortunes. See ourselves as harbingers of the bad, as if we could do something for it. One day we were even allowed to sit on the shoulder of the god Odin, who knew how to appreciate our gifts.’ ‘The gift of seeing into the past and into the future,’ added the first raven. ‚What’s the point of seeing the past?‘ I asked confused, you already know it. ‘Your view, only yours, but we have the whole thing in view,’ said one raven. ‘Then tell me what really happened last night and how it will go on,’ I asked eagerly. ‘You will find out when you can bear it,’ replied the second raven succinctly. So, the day passed, and this time too I fell asleep quickly, but something woke me in the middle of the night, a hammering and wailing that rang in my ears. It rang from above. There had to be another room. It sounded so pathetic and hopeless, almost as if the same thing happened to me. Was that my job? Was that the reason why I ended up here?“
And again you left many questions unanswered as you disappeared into the night as silently as a cat.