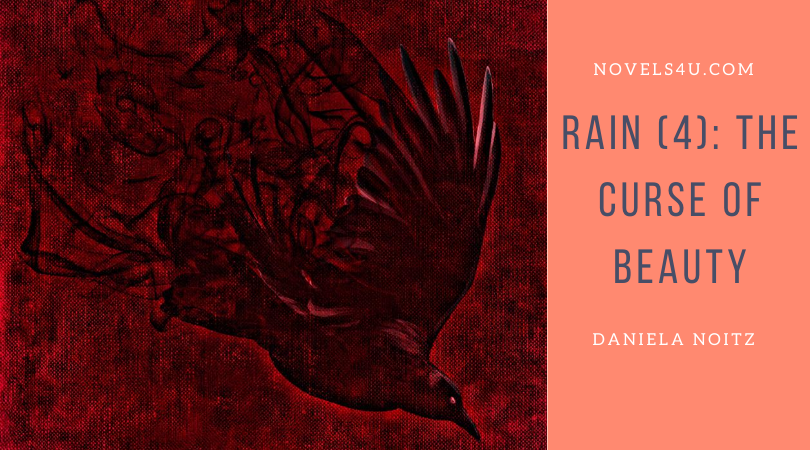 “And I was caught up in this wonder of beauty and grace while a shiver of perfection ran over me. Yes, she was spotless, my aunt Morgana, my mother’s sister. I felt attracted to her, and at the same time repelled. It pushed me to her, and yet in her presence I became cold, ice-cold, so that even the image of the fire before my eyes seemed to freeze. My mother wasn’t half as beautiful as she was, but how much more comfortable it was to be around her, because my mother radiated warmth and cordiality. Only now did I realize that my aunt had never actually been spoken of as long as I could remember. All I knew was that she existed. There seemed to be some sort of secret agreement that this woman should not be talked about. ‚You will stay with us, Morrigan‘, my aunt tore me out of my thoughts, ‚I offer you my hospitality and accommodation.‘ ‚I don’t think I want to stay‘, I replied with full conviction. Sure, I didn’t know where else to go, but here, here, I definitely didn’t want to stay. Better to spend the night in the forest, in the dark, eerie forest. But there were the wolves. Maybe they would come back to protect me. ‚I want to go,‘ I said firmly, but Aunt Morgana drove up to me. Only now did I notice that she was in a wheelchair. I was so absorbed in it that I was even able to miss something as conspicuous. ‘I don’t think you have a choice,’ she hissed softly between her teeth as she came to a stop just in front of me and the freezing cold that emanated from her made me stumble. ‚Yes, I’ll just go,‘ I replied. ‘What a shame. Really a shame. I was hoping we could sort it out nicely, but whether you like it or not, you will stay. Nobody leaves me who I don’t allow it,’ she said bluntly. ‚That’s why you’re sitting in there because someone didn’t want to put up with something!‘ I replied sharply. ‚I can imagine that you don’t know much about me. For some reason my sister didn’t talk about or to me. And I loved her so much,’ she began to say, ‘And yet your guess was completely wrong. Nobody before you ever wanted to leave me. Everyone fell in love with me and my beauty. The fact that I can no longer use my legs is thanks to someone who refused to let go of me. Before he threw himself to his death out the window, he pushed me down the stairs. What a weakling. Really embarrassing. Absolutely incomprehensible that I ever allowed this person to harbor feelings for me. Yes, they will soon have feelings, but they do not want to face the consequences. That is the curse of beauty. All, all have fallen for me. In the end I didn’t even dare go outside the door. The only one who was unimpressed was your uncle, but he’s also blind. That’s why he was the only one who came into question for me, the only one who was worthy of me. Until now, only your mother had known the secret of my accident, and she took this knowledge with her to the grave. Unfortunately, you were left. You know it now too. That’s why I can’t let you go, never again. You only have the choice of staying voluntarily or by force. No matter how, you will stay. And don’t try to escape. We are in the middle of the thickest forest. You wouldn’t have a chance,’ did not forget to mention it. But I thought of the two ravens, of the two wolves. I thought about it briefly. Apparently, there was no one here except a woman in a wheelchair and a blind man. What could they do to me? So, I ran back to the gate, but then I felt packed. Strong arms wrapped around me, and as hard as I struggled, I had no chance of getting along. Perhaps he was blind, my uncle Ernst, but that wasn’t weak. His grip was implacable. So, he dragged me a good 100 steps up a steep staircase to a tower room, in which he locked me. And the darkness had mercy on me. „
As much as I hoped you’d tell others I could hold you, the rain subsided and you escaped me like a leaf blown by the wind.