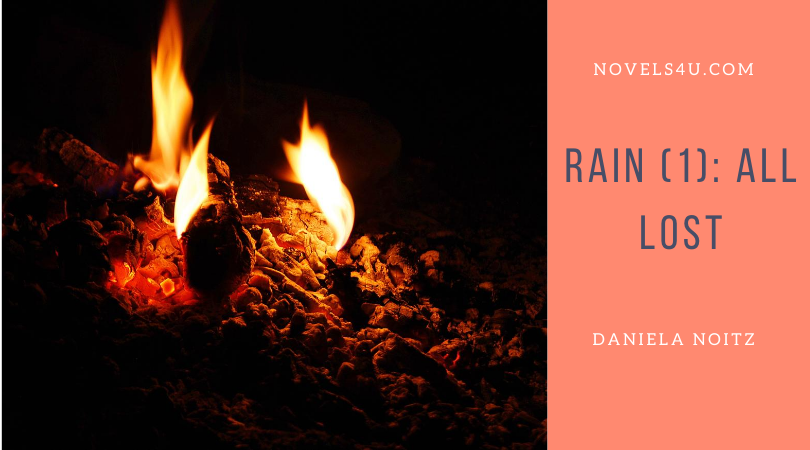 It had long since announced itself, the rain. I sat on the dock and waited. The full moon was hidden behind a thick blanket of cloud. Drop by drop by drop fell on me, soaking my dress, my skin, my hair, but I stayed, because you had come, sat next to me in the rain and told me your story. I did not dare to move because I was afraid that my movement might drive you away. You are as shy as a deer, and yet you don’t mind the rain, and you are indifferent to lightning and thunder, only people scare you.

“I was seventeen when I had to leave,” you began to say, “Seventeen years. One can argue whether it was a long or a short span of life, those seventeen years. But when are you still too young for it or already old enough to lose everything, everything that you could ever call your own in a lifetime? All my belongings, clothes, books, games had been taken from me as well as all my souvenirs, my home and my family. Not the memories, because memories have the cursed quality of just going on living in you, whether you want to or not. How happy she is who is blessed with a complete amnesia, who with everything she loses can also leave the thoughts and experiences associated with it behind. Just as the outside is changed in a bare, empty table, so your inside still lays a crisp white tablecloth on it, as if the table of life was ready to be set anew, without any guidelines or considerations. Such a trauma, and yet not the slightest loss of memory. For those who retain their memory, life is a charred table that was set with everything that had gone before, that did not burn, but only melted away and clumped together with the table. Tough like chewing gum and annoying like tar that won’t come off your shoe once you’ve stepped on it. One last look back at the house I grew up in, or rather, at the place where it once stood, because there was nothing left but a black spot, a huge black spot in the meadow. Nothing escaped the fire. I came back that morning because I had stayed with a friend that night and found this. All the things that surrounded me, all the people who had lived with me in this house and whom I had called my family, my mother, my father, my two brothers, everything had fallen into flames. Things and people, inanimate and animate, as everything is turned into one by the flames. No difference remains. Maybe there was one thing or another that wasn’t quite burned, but everything was black. I could have looked for clues in these remains of ashes, but what good would it have done just to deepen the pain and make the certainty even clearer. I came there, to the place so familiar to me, and recognized nothing. Why wasn’t I home that night? Why wasn’t I allowed to burn with them? Was it my fate to bring grief into the world or should I be forged in iron? Was it really necessary to be so cruel to me? If I had believed in something like fate, then maybe it would have been easier, but I didn’t believe in it. I couldn’t exonerate myself, reassure myself that I was blaming someone or anything else. Just a small change and everything would have turned out differently, but it hadn’t turned out differently, just the way it was. I wasn’t there. It was just like that. No more and no less. But then why did I see the flames so precisely in front of me?“, You began your story, and then disappeared because the rain subsided. You would come back with him.