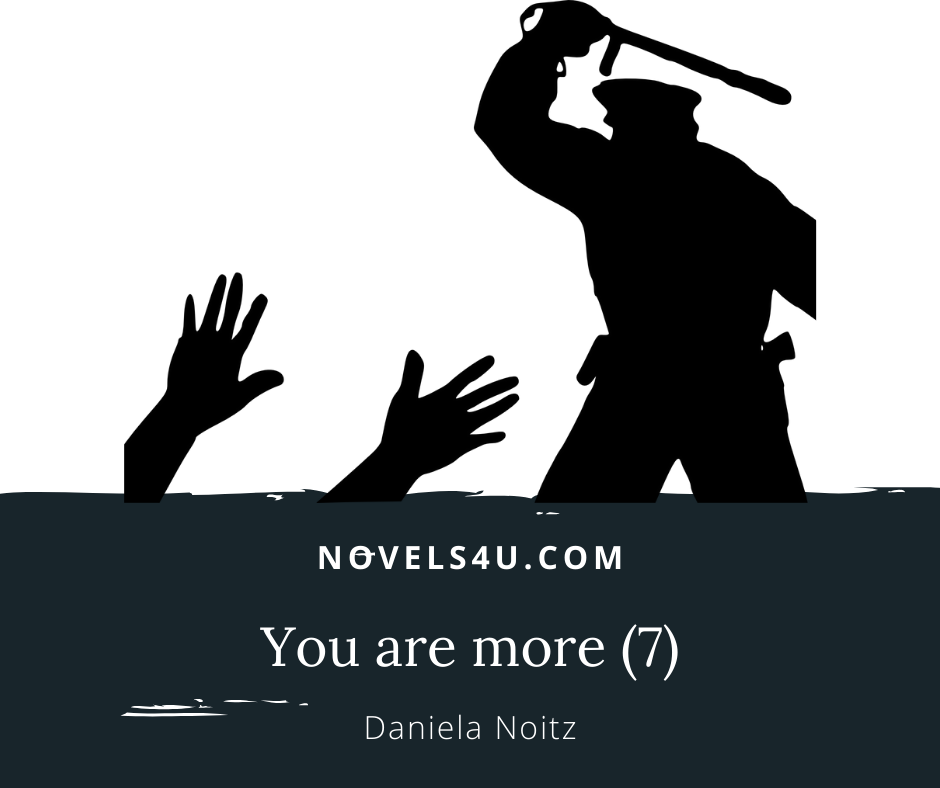 „From the public through the elected representatives,“ countered the policeman, „That’s why we have politicians who know what belongs and what doesn’t and what people want.“
„The public space has been badly neglected for far too long,“ said Yvonne gracefully. „There is much more to laugh, dance and embellish. People meet and make their lives more colorful. The public space is good for that. Art has to be free and visible. We have to recapture public space and not leave it to politicians who often have no idea about life. ”
„So this is also incitement to a crime,“ said the executive, „You will now eliminate this trick or I will take you with me.“

„Incitement to a crime? Take it with you?“, Repeated Yvonne seriously as she stood on her feet, „I will leave it as it is, because this work of art will wash away the next rain and then something new can emerge. „
„ID card,“ the policeman continued grimly.
„No,“ Yvonne replied firmly.
„You must identify yourself,“ the officer tried to use his authority in the field.
„No, I don’t have to,“ explained Yvonne, who knew exactly that the policeman was lying to her.
„If I catch you in a crime, then yes,“ he said now.
„I have committed no crime,“ said Yvonne.
„Pollution of the public space is a criminal offense,“ the uniformed man tried again.
„Such nonsense,“ broke out Yvonne, „is that supposed to be pollution? A wonderful, colorful drawing that will be washed away again soon, but the concrete blocks that we have to look at every day and become cloudy from it, that no longer disappear, are not pollution?”
„We will clarify this at the guard,“ said the policeman, „you are coming with me now.“
„I’m definitely not going anywhere,“ said Yvonne emphatically.
„But you have to, that’s your duty,“ said the other person.
„No, that’s not true,“ Yvonne replied shortly.
„So you want to say I’m lying?“ Asked the policeman.
„No, I’m just saying that it’s not true,“ said Yvonne, almost amused. It was anything but funny when she thought about how many good citizens could be persuaded that they had to identify themselves just because an executive body was funny. Or took someone with him who didn’t stand by his face. It was actually a well-thought-out trick, because in hindsight it was said, of course, that people would have done it voluntarily and were simply cooperative. And of course, the police always tell the truth. This is how we are taught.
„Then I’ll take you with me now,“ said the policeman, who had meanwhile become flushed with anger. Probably because he had found someone in Yvonne who was not intimidated by his uniform or his authority.
„As you like,“ said Yvonne, whereupon the uniformed man took her arm and started to take her away. At the same time, two strong arms wrapped around the petite girl to protect her. The policeman had to raise his eyes wide in order to be able to face the person who was now campaigning for Yvonne.
„Then you have to take me with you too,“ said Mark firmly. You could really see the cop swallowing. It was probably a little different to intimidate a small petite girl, or at least try than a four-cheeked man.
„Good,“ said the representative of law at last, „I’ll let it go this time, but never do that again! Stop polluting the street. Otherwise I really have to arrest you. „
„Then you have to arrest me too,“ said Mark, grabbed one of Yvonne’s chalks and began to paint.
„And me too,“ said a lady who had apparently overheard the whole conversation, then joined Mark and also painted. Gradually, more and more people came in, old and young, well and less well-off to recapture public space. Yvonne felt tears of joy in her eyes over so much solidarity. She smiled bravely at the policeman, who watched the events a little dismayed and then resolutely sought the distance.
„Maybe he was just so bad because he wasn’t allowed to paint,“ thought Yvonne. Then she sat down next to Mark to make the world a little bit more colorful with everyone else, even if it was only temporary.