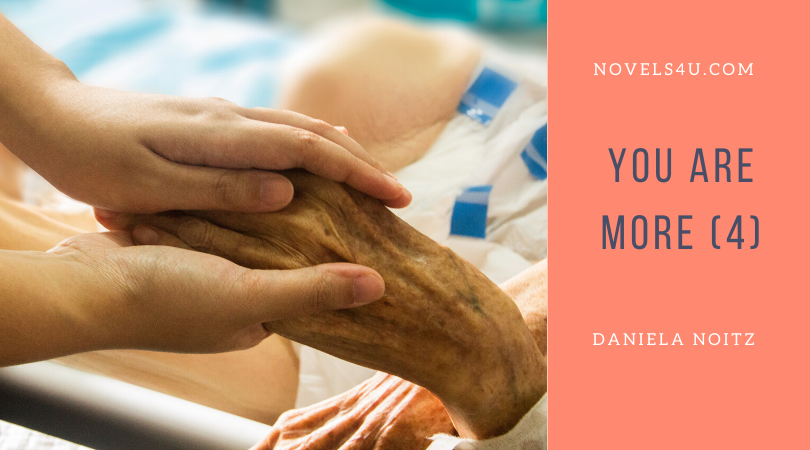 These injuries are memorable, externally and internally, accompany and shape us. It’s just a question of how we deal with them, but also how our environment responds. With Mark, people tried to avoid him as much as possible. As dangerous as he looked, he must have been. With the absolute certainty of the prejudices, they razor-sharp concluded that his scars must have come from tangible arguments he had caused. After all, he was the prime example of a rough block, insensitive, who only knows violence. They were done with that. Had they been sitting here, like Yvonne, they could have guessed that nothing was more from reality, from Mark’s real being, than these claims. But who takes the time to not just label someone else with prejudices, put them in a drawer and leave them there? Hardly anyone. Yvonne would have done it, even without kidnapping, but she knew that Mark had been disappointed so many times that he couldn’t believe it. Yvonne was also marked by this scar, but its shape made it easy to assume that she had been the victim. That changed a lot. Of course, Yvonne had tried to hide this blemish for a while, but at some point she was ready to say, „This is my story. Either you take me as I am or you leave it. „

„And you stayed with your mother anyway?“ Mark asked.
„No, I came away from her,“ said Yvonne, shaking her head. „She had probably abused me many times, but always so that nobody could see anything. But with the best will in the world, that could no longer be concealed. The juvenile court decided that I should come to an aunt who was far from pleased. However, she received maintenance for me, which made her a little more balanced. For the most part, she just left me alone, which was progress in my situation. But I also made sure that I could stand on my own feet as quickly as possible. I took on occupations that I could get. But I was unhappy until I finally got an NGO so that I could finally do something that I thought made sense. Then I came across the LLL, the Life Liberation League, where I met a lot of great people. I learned that everyone has their story that they carry with them. It’s always just a question of what we make of it. You can bury yourself in your grief or stand up for others who may be much worse off. It was like starting a whole new life. And at that moment my mother appeared. I hadn’t seen her in many years. I would have thrown her upright a few months earlier, but I had found out that she had made me her victim because she was one herself. Abused by her father, sold and betrayed, abandoned by her mother, and finally ended up with a man who hit her, she had failed to break the vicious circle. I was aware of all this when a completely broken woman who was exhausted to the bone stood at my door. At first, I hadn’t recognized her, but when I realized who was standing there in front of me so miserable and run down, there was no doubt that I had to help her. I have looked after her for the last months of her life. It was already too late for her. The alcohol and guilt had ruined them. ”
„But you have accompanied her through the past few months,“ interjected Mark, „could it be that it was more than she had ever known of good?“
„I almost assume it,“ explained Yvonne thoughtfully, „it is very likely.“
„It is impressive how you dealt with how you took charge of your life,“ replied Mark, stroking her scar gently again. Then Yvonne pulled him close and kissed him, gently and intimately. And that kiss was a little promise to take care of them as they were, with all those injuries, both internal and external. Mark felt her warm, soft body very close to his, while feeling like never before in her life.