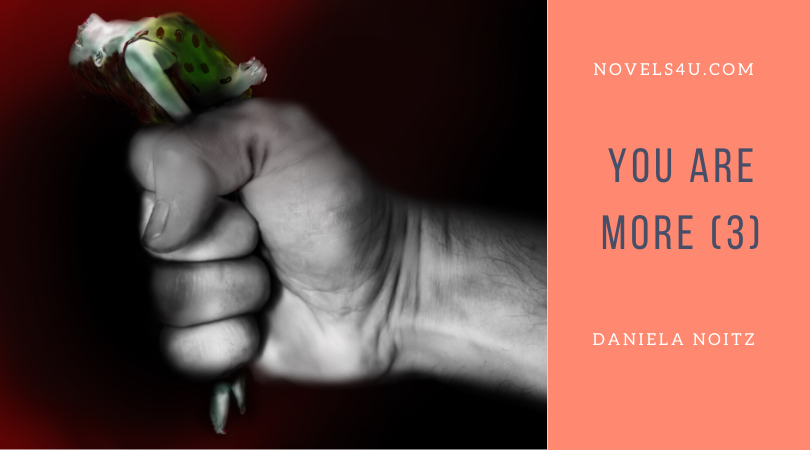 Mark despondently dropped his hands. Now that he was so close to Yvonne, he seemed speechless. There was this tough, energetic girl who didn’t turn away from him, but even asked him to tell his story and he, with his inner and outer mutilations. He noticed how good she smelled. He stole his gaze over her body and noticed that the skirt was slightly shifted so that he could see the top of her stockings. He quickly looked away again, as if he had been caught doing something wrong. Yvonne must have noticed, but she was still smiling at him, encouraging and motivating.

„The best thing to do is to start at the beginning,“ he said, „before I was born. My mother was very proud of her three daughters. She always only wanted girls, because in her opinion one man, my father, in the house was already one too many. She always let him feel that, which I only know from stories, because he died when my mother discovered that she was pregnant with me. When her gynecologist also informed her that the wrong chromosomes had been paired, she was only angry and tried to interrupt the pregnancy in every possible way. I will spare you the details, but I was obviously too resilient because I was born. And from day one she let me feel how unwelcome I was. I owe the fact that I am alive at all to her quirky religiosity, which prohibited professional abortion, and the talk of the people. She always put a lot of emphasis on that. That is why she always showed herself in public as the perfect mother. It was not difficult for my three sisters because she adored them. But it was probably a big challenge for me. Once, I must have been about five, she was so angry after a family celebration because she had to pull themselves together to throw me through a glass door. Hence the scars on my face. At the hospital, she said I had gone through. Because boys would be as impetuous as she said smiling and flirtatious. And she was believed. So, I grew up trying to make myself as invisible as possible. I wish I didn’t exist, but there was and that was terrible, my mother made me feel it at every opportunity. When I finally finished school, I looked for a job and moved out without leaving a message. My mother was obviously happy because I never heard from her again. I struggled through. I was gladly taken wherever my physical strength was beneficial. Right now, I’m working as a night watchman. I meet very few people there. „
„Thank you for telling me your story,“ Yvonne, who had been listening quietly, replied in a choked voice, tears running down her cheeks. She showed no reason to hide them.
„But I didn’t want to make you sad,“ said Mark softly.
“I know that,” said Yvonne, “All the time I thought I would like to hug this little boy and just take him with me. And with that she sat up and stroked the little boy he still was, even in the shape of a tall man, gently on the cheek, on his scars, as if she could heal them. A gentle, small but lasting touch before she hugged him and she felt him let go. All the weeping tears broke away as her hand stroked his trembling back until he slowly calmed down. Finally, he pushed her away.
„What do you have to think of me,“ he said.
„That you’re a deeply injured person and it’s time to heal those injuries,“ she said. Then he finally dared to raise his hand and stroke his left side of the face.
„What happened there?“ He asked.
„My mother mistaken my face for the ironing board,“ said Yvonne, „In any case, she put the hot iron on it. But that can happen when you are drunken.“ Then Mark realized that it wasn’t just him who was carrying injuries that needed to be healed.