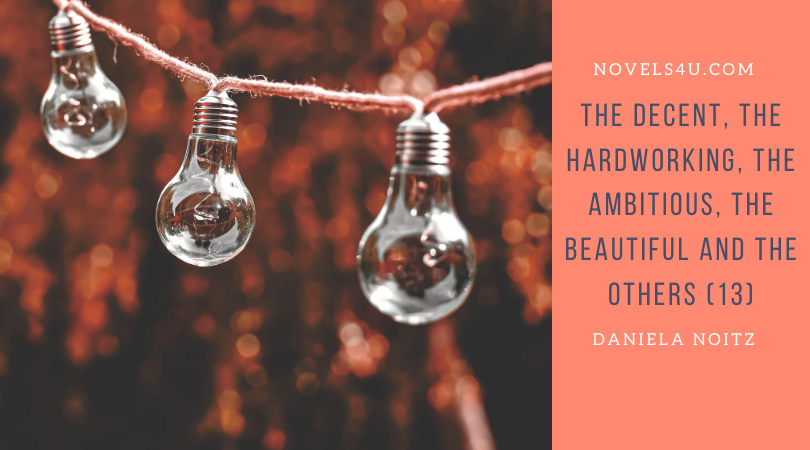 The small group, consisting of Amanda and Waldemar Ambitious, Hartmut Beautiful and Verena Hardworking, who still carried little Jimmy in her arms, started to move. Lisa was amazed when she opened the door when she rang the bell.
„May we come in?“ Asked Ms. Hardworking, who had taken the lead and thus reinforced the impression of a procession.
„Yes, of course,“ said Lisa, who did not understand what was going on, but did not want to stand in the way of upcoming events, because there were changes in the air that was almost palpable. With this, Lisa led the newcomers to the terrace. All around was introduced and shaken hands. But the first reactions were not only positive.
„What do they want here?“, hissed Marie-Luise Brügge to her husband.
„Let’s wait and see,“ he said calmly.

„Jimmy, you are back!“, said Mrs. Beautiful involuntarily, „Gosh, where have you been? We have been looking for you everywhere!” With a beam of joy, she walked up to Mrs. Hardworking to receive her dog.
„He had strayed into the garden with me,“ said Mrs. Hardworking.
„I am sorry that I have caused you so many problems,“ said Mrs. Beautiful.
„There is nothing to be sorry for,“ replied Mrs. Hardworking gently, „On the contrary, I have to thank you.“ With that she gave Mrs. Beautiful Jimmy a little reluctant, but she had no choice. Jimmy struggled free from his owner’s arms and ran into the garden to continue playing. Mr. Hardworking had been watching the scene diligently and was sure that he had never seen such an expression of warmth and frankness in his wife’s eyes. It was as if she was a complete stranger who was so familiar to him. Involuntarily he got up and went to her. For a while you just faced each other and looked at each other. Then Mr. Hardworking knelt down. Busy down, took his wife’s hands.
„Do you want to be my wife?“, he asked seriously and solemnly.
„What a question,“ replied Mrs. Hardworking with a laugh, „we have been married for decades.“
„That’s right,“ said Mr. Hardworking, „But the woman I have been married to is different from the one who is now in front of me.“
„That’s right,“ she replied softly, „I never thought you’d notice.“
„Probably because you didn’t know a lot, you didn’t know about me and I didn’t know about you,“ said Mr. Hardworking.
„But it’s not too late to catch up,“ she said gently, pulling him back to his feet, hugging him and letting her tears run free, tears of relief and joy, because she hadn’t lost him yet. And she wasn’t ashamed. Mr. Dr. Beautiful, who had been a little unsettled when they came, felt strengthened by this observation and sat down with his wife.
„Lucinda, how beautiful you are,“ he said, and it actually sounded sincere.
„Oh yes, now I’m suddenly beautiful?“, she replied snappily, „So without makeup and with wrinkles and all the trimmings.“
„Yes, you are,“ he confirmed without being distracted by her suspicion, „I saw you laugh. Your eyes flashed. You seemed so full of joie de vivre as I have not seen it in a long time. Then I remembered that I fell in love with you for exactly that reason. But I drove it away with my perfection craze and all the other nonsense. I simply forgot about it. Happiness is what makes a person shine. Everything else is nonsense.“
„And what about the clinic? I mean, you sell exactly what you demonize there,” replied Mrs. Beautiful skeptically.
“With your help, I want to change that,” he explained, “You can remember that in the beginning I mainly operated on patients who were disfigured due to an accident or illness. I actually helped them back to life. I want to do that again.“
„It’s wonderful,“ said Mrs. Beautiful thoughtfully, „but I still want to pursue my own plans.“
„And what would they be?“, asked Mr. Dr. Beautiful.
„I want to study architecture and Mr. Hardworking has already offered me a job,” she replied, looking at her husband skeptically because she didn’t know how he would react to the news.