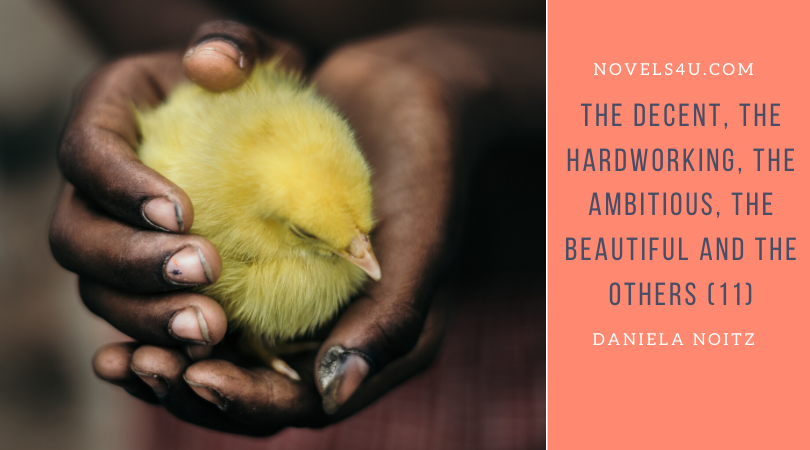 Mrs. Hardworking held little Jimmy in her arms and first examined his paws to find out the reason for his whimpering, which she quickly found in the form of a thorn that had drilled into the bale and which she removed with a jerk. „You have to remove the cause of the pain, then you can treat the wound,“ she thought to herself. Jimmy had just flinched, but otherwise let it go silently. Missing thought, Mrs. Hardworking began to scratch his belly, feeling that something was moving inside her. It was as if the ice had started to melt, which she had cultivated for so long about her feelings and hopes, her dreams and longings, so that she didn’t have to deal with them. It thawed and broke in the form of tears that ran down her cheeks. So many unheard tears over the estrangement from her husband and children. Jimmy only looked at her as if he knew.

Of course, she had wanted to build a life for herself. She came from very poor conditions, in which it was never certain whether there would be something to eat on the table the next day or whether the heating would be turned off in the middle of winter because they could not pay the bills. Her parents were hardworking and worked hard. But they were simple helpers who had to take care of themselves and the six children. Her childhood seemed like a series of days full of fear and depression. There was no exuberant play, no distraction, just this dull gloom. They lived day to day, hand to mouth, with no prospect of improvement. When Mrs. Hardworking came to school it got worse, because she was avoided as if she had a mark of Cain on her forehead, the mark of Cain of poverty. Nothing hurts so much, not even hunger and cold, like social exclusion. She was not invited because she could not invite anyone, did not share experiences because she could not attend school events because her family lacked the money and was teased because of her appearance because she had to put on the old things of her big siblings, always and had been patched again and again. Then she made up her mind that she would escape this abyss, no matter how. As soon as she could, she left school, worked as a secretary, and thus contributed to the family income. In addition, she took courses that improved her qualifications. She quickly worked her way up and after a few years earned more than her parents together. Of course, she had dreams and desires like young girls have, but she hid them because nothing should distract them from their goals. That made her look tough. When she met Markus Hardworking, she recognized at first glance that this man was the right one to build a life according to her ideas. She went to work with all objectivity, so that he was soon convinced that this woman was the right one for him. And the dreams and desires remained hidden, but now that this little dog was in her arms and tears were running down her cheeks, she realized that it was time to change something. Hopefully it wasn’t too late. First, she wanted to bring Jimmy back and then look for her husband, whom she hoped she hadn’t lost yet.

Meanwhile, Mr. Dr. Beautiful was to finish his meal and put the cutlery aside. His hosts, Mr. and Mrs. Ambitious, still sat silent and blowing sorrow. How could that have happened? How could they have been so blind to the obvious? „Life could be so simple and peaceful and natural,“ thought Mr. Dr. Beautiful involuntarily and saw the beef he had just eaten grazing peacefully in his mind’s eye. „Simple, peaceful and natural,“ he repeated for himself, „like Lucinda’s laugh or her undisguised affection, her spontaneity. How long ago was that? I suffocated her under everything I asked her to do, because I had always done it. But wouldn’t another way be possible? Couldn’t one finally turn life upside down that it would be the same again as before, and she the woman with whom I fell in love and whom I drove out so sustainably. Maybe I can still find her.“