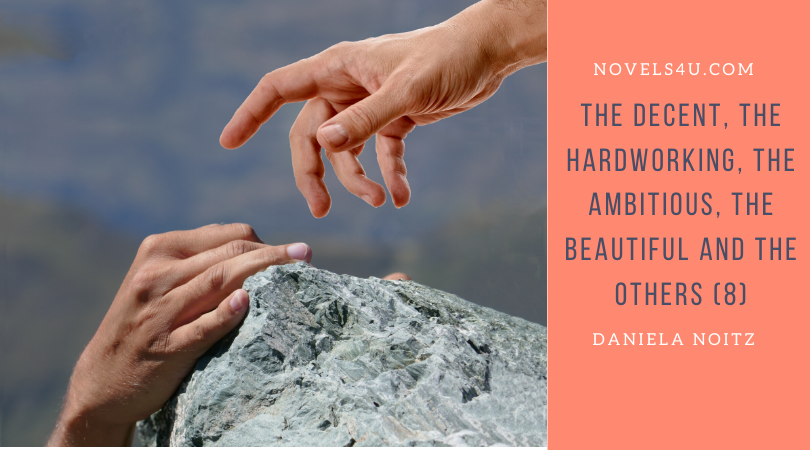 „May I use your bathroom?“, asked Mrs. Beautiful straightforwardly. Lisa showed her the way. When she returned with makeup removed a few minutes later, Mr. Hardworking mouths open diligently.
„What a charming woman you are,“ he summarized his thoughts. He had simply said what went through his head spontaneously without subjecting his words to normal social censorship.
“It’s so unusual,” Mrs. Beautiful admitted, “I don’t think I’ve seen myself in makeup for ages, or at least haven’t really looked at it. It’s like I’m naked. I don’t think I can dare go home like that. „
„Why not?“, asked Ben.
„Well, because I am nothing more for my husband than the figurehead for his clinic, as he made it unmistakably clear to me. If I’m not pretty enough anymore, he can just put me on the street. At least that’s what it says in our marriage contract,” she admitted sheepishly.
„Why do you put up with this?“, Lisa asked, „I think you are an intelligent woman who has many options. Isn’t there something they always dreamed of?“

„But there is,“ Mrs. Beautiful admitted, „After we had graduated from high school, my girlfriend, my very best, began to study architecture. I envied her so much. How I would have loved to do that, but my mother said it was just wasted money because I’m too stupid to study. I think I believed her.“
„What is stopping you from not trying it now?“, Lisa did not let go.
„How should I finance that? What should I live from?”, returned the addressed, frightened and unsettled, but also full of longing.
„I think that could be arranged,“ Mr. Hardworking into the conversation, who had been listening quietly so far, „You get a job with me and study alongside. I could use a good architect. And not just me.“
„It’s very nice of you,“ Ms. Schön admitted, „But you don’t know anything about me and I haven’t even started studying and …“
„That’s right,“ interrupted Mr. Hardworking her tirade, „I don’t even know your first name. By the way, my name is Markus.“
„Lucinda,“ said Mrs. Beautiful.
„Ben,“ said Ben, and Lisa was the last to name her, not forgetting to point out and add to her children, „And that’s Nina and Leo.“
„And as far as your qualifications are concerned, Lucinda“, continued Markus Hardworking, while he let the first name of his interlocutor roll over the tongue with relish, so I have a very good understanding of human nature. Anyone who does something with passion can learn everything. Those who have only learned and imitate it can never create anything new. And in order not to make it too easy for you, I expect full commitment alongside my studies and support at all times. „
„Is OK. Thank you very much,“ replied Lucinda Schön, „But what do I do with my husband? How do I get out of there? „

And while Lucinda Beautiful was thinking about her precarious situation, Mrs. Decent quoted her husband on the terrace.
„Now look at this“, she asked him and pointed with her pointed index finger at the garden, in which six people and a dog, along with some crawling and flying garden residents, had a pleasant chat, „Or no, listen to it better at. They organize such a riot that it is unbearable. It can’t be allowed to have lunch on a Sunday. What are you a lawyer for? Go over there and reprimand them. You will think of something. „
„But honey, it’s just a harmless pleasure …“, he tried to appease her.
„Harmless pleasure?“, she said, „If you don’t do something right now, then we’re divorced people. You can’t do that in a decent neighborhood. Everything was fine until they moved in. Do not march and dare to go home until you stop it.” With that she pushed him to the door and down the stairs. Mr. Dr. Decent felt very uncomfortable in his skin when he started the heavy walk to the neighbors. „Henry IV must have felt that way on his way to Canossa,“ he thought when he arrived at the garden door of Ben and Lisa, stopped, took a deep breath and finally rang the bell.