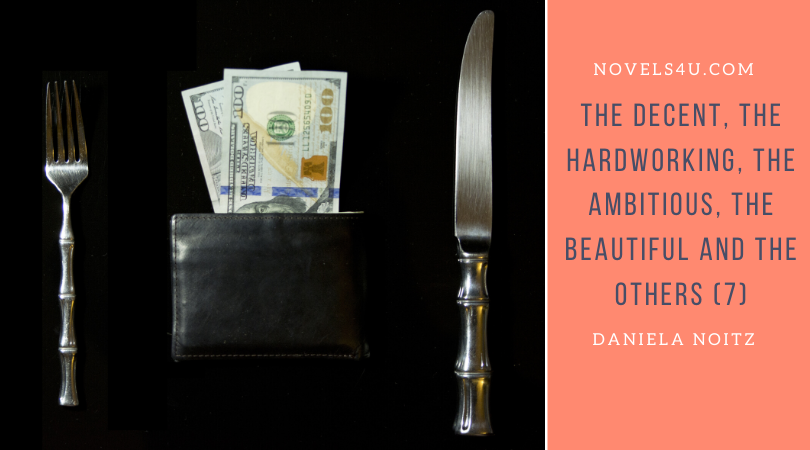 „Now look at this!“, Mrs. Ambitious asked her husband, who was standing in the garden and grilling. She herself had a good view of the surrounding property from the terrace, “Those who get involved with whom these days are amazing. Some people have absolutely no sense of class.“
„Darling, don’t be so anti-social again,“ he replied, carefully turning the Kobe beef steak over. Their guests would come at any moment and the expensive meat should be perfect. „An investment that definitely pays off,“ thought Mr. Ambitious, who had managed to get into the most exquisite business circles together with his wife. That means a lot of work and personal effort, but they did it. A fat order waved for her PR agency. It was as if the contract only had to be signed. He grinned gleefully as his gaze watched the grilling progress closely. „There are € 200 on the grill,“ he thought when his wife tore him out of concentration again.
„Don’t you want to know who’s bothering with whom?“, she asked bluntly. He didn’t really care at the moment, but after knowing his wife for a few years, he was aware that she wouldn’t let go. It was easier to ask right away.

„So who gets involved with whom, darling?“, he asked therefore.
„Mr. Hardworking and Mrs. Beautiful with these newcomers, these pseudo hippies,“ she explained triumphantly.
„Aha,“ he replied briefly as he mentally removed these two from his list of acquaintances. That could only be bad for the image, but then looked up irritated, „What only the two?“
„Yes, only the two of them are sitting there, without partners and joking and chatting with them“, Mrs. Ambitious described the observed scene with relish.
„Incredible, really,“ another voice mixed into the spouses‘ conversation. Irritated, the two looked up to find the voice to Mr. Dr. Beautiful belonged, who apparently watched the scene in the garden of Lisa and Ben, as well as the conversation between Mrs. and Mr. Ambitious, „And she told me she only goes out with the dog for a short time. But I will not be offered that. That will still look at.“
„Don’t you want to come to dinner?“, asked Mr. Ambitious, diligent, who immediately sensed his chance to come up with the most respected cosmetic surgeon in the city.
„I would very much like that,“ said Mr. Dr. Beautiful and spontaneous, he thought he could wipe one out of his wife. He imagined how he later said that he had dined with the finest circles. Only he and not her.
„How can you make yourself so mean. That rubs off. Laugh and joke with each other,” added Ms. Ambitious before disappearing from the terrace to let in the guests who had just made themselves known by ringing the bell.

They had fun, these different people in the garden of Ben and Lisa. The longer they talked, the more they realized that there was so much that they have in common across the self-constructed borders. Caring for life and for those close to you, security and safety, familiarity and reliability, these are things that unite us.
„Say, why do you have so much color on your face?”, asked Nina Mrs. Beautiful suddenly. There was an embarrassed silence and the person addressed did not know what to reply, especially since she was confronted with it for the first time. “You have to make yourself beautiful,” had been her mother’s creed, “because a woman has nothing but her beauty in this society. Everything else is unimportant. That is your capital. And you got some of it. So, pay the dividend as long as possible.” And Mrs. Beautiful had always stuck to that. But it was a deceptive capital, as she now had to admit, especially after talking to her husband. Beauty is transient. Perhaps she should have brought her sheep to dry earlier, but she was too little calculation. What was her alternative? Only then did she notice that the girl was still waiting for an answer.
„Why do you want to know that?“, replied Mrs. Beautiful evasively.
„Because mom never does and you look a bit like a clown,“ the little girl said flatly.
“You are probably right,” said Mrs. Beautiful, “I actually let myself be made into a clown, a joke figure. But not anymore.“