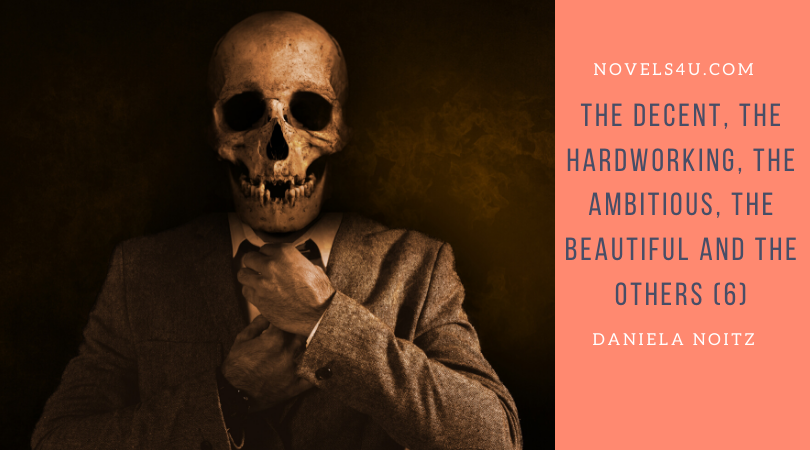 Mr. Hardworking took the cake, which he had baked himself while his wife was working. But when didn’t she? He almost didn’t care, though he still hadn’t given up hope. Of course, he had known that his wife had ambitious plans before they were married, but for him that had combined wonderfully. A woman he loved and with whom he could have fulfilled his life plans. The plans had also worked out, only that for his wife only these counted, but not love. He had the dull feeling that his wife couldn’t love at all. He quickly banished this thought because he felt that it still hurt because she had actually only used him. But now there was no time for cloudy thoughts, but for joy and serenity. So, he left the house comfortably, walked the few steps along the sidewalk and almost stumbled across a whispering something that had come to his feet. He looked down in surprise, but when that little something made a piercing yap, there was no doubt about it.

„What are you like a sweet little one,“ said Mr. Hardworking as he dropped to his knees to pet the dog, who was also very pleased with this attention.
„I’m so terribly sorry!“, he heard Mrs. Beautiful’s voice contrite, „I was so thoughtful that I didn’t pay attention.“
„Nothing happened,“ tried Mr. Hardworking to reassure her, „I was only worried that I might have hurt the little one. What is his name actually? „
„Jimmy,“ said Mrs. Beautiful, who also crouched, „and he’s so cocky. I better take care of him.“
„Are you all right?“, asked Mr. Hardworking after looking away from the dog at his owner. The reddened eyes caught his eye immediately.
„It’s okay,“ she replied wearily, even though she felt an urge to pour out her heart to him, but something held her back. After all, they hardly knew each other. Sure, they knew their names and where they lived, but that was all. You had nothing to do with the neighbors, because everyone was always very busy, „But thanks for asking,“ she said with a tired smile. With that she wanted to say goodbye with a subtle nod, but Mr. Hardworking had spontaneously decided not to let her go like that, with her sad look and sagging shoulders.
„Do you know what?“, he asked suddenly, without really expecting an answer, because how should she know whatever it was, „You are coming with me now – I don’t even know how they’re called – new neighbors.“
„But you don’t mean those who moved into the house of old Mrs. Wichant?“, exclaimed Mrs. Beautiful, as if her Mr. Hardworking made an indecent offer.
„Exactly that,“ he confirmed, pleased to take her by the hand and with him.
„But that’s not possible, we cannot be that easy …“, complained Mrs. Beautiful until Lisa opened the front door for them. She looked at the two unexpected guests in astonishment.
„Hello,“ said Lisa, „can I do something for you?“
„Yes, you can!“, said Mr. Hardworking brisk, which astonished him about himself, „I have a cake here and we will eat it together. If you ask us inside and if not, then here.“
„Very much,“ said Lisa and asked the two of them to take them straight to the terrace.
„Ben, Nina, Leo,“ she called to draw attention to herself, which was not so easy because they were just immersed in the game, „Look, we have visitors.“ All three came to the newcomers welcome.
„I make coffee and get plates,“ said Lisa and disappeared into the house.
„You brought cake with you?“, asked Ben curiously.
„Yes,“ confirmed Mr. Hardworking proud, “It’s homemade and vegan. I know.“
„How do you know that?“, Ben was surprised, because they didn’t peddle with it.
„Well, I spoke to old Mrs. Wichant every now and then. A wonderful woman, by the way,” said Mr. Hardworking. Then Lisa returned with a tray with a large coffee pot and plates. They sat down comfortably and cut the cake.