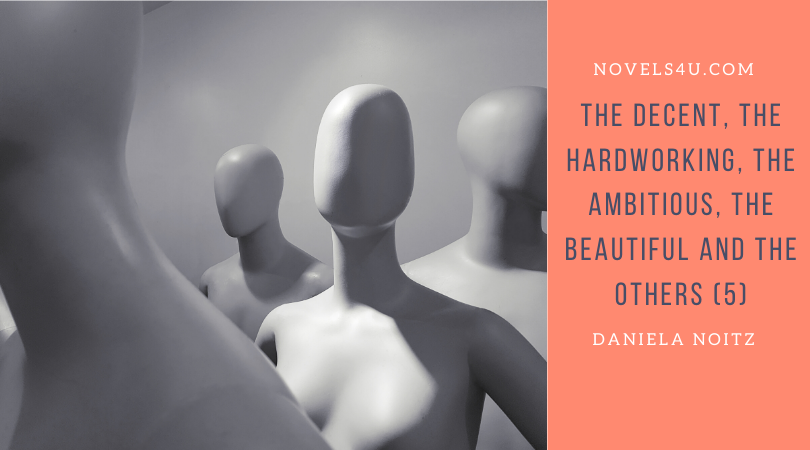 Mrs. Hardworking had got up at dawn, like every other day of the week, had only made a quick coffee and sat on the terrace with her laptop. Little by little, life awoke around her.
„Damn birds,“ she thought as they raised to their morning concert, „And we owe this noise to those parasites who now live in Fr. Wichant’s house.“ Food sources for insects who also gladly accepted it. The birds came back in their wake, which now bothered Ms. Hardworking at work, but that also passed and, in the morning, all four, Ben, Lisa, Nina and Leo came into the garden to splash and play. It was the second time this morning that Ms. Hardworking felt disturbed in her concentration. „Dear me, does that never stop? How quiet it was here before they moved in!“, she thought, while sniffing a grim look at the pack, which obviously had a lot of fun, „I mean that old Mrs. Wichant didn’t work, that’s still somehow understandable. Although, what are people good for when they are not working? But this clan down there is the worst. They don’t work because they have time to play with their children. The grimaces are spoiled too much.” Then she turned back to her laptop.

„Good morning!“, said Mr. Hardworking as he stepped out onto the terrace to sit at the table next to his wife.
„Don’t you have anything to do?“, she asked brusquely, eagerly ignoring his greeting, „Could it be that I am the only one in this house who is doing anything while you are sitting in peace and drinking coffee?“
„Well, you’re working for both of us anyway,“ he said, amused as he lit a cigarette and watched the blue plumes of smoke pensively.
„Really, that seems to be a kind of virus, this laziness, nobody works anymore. This pack down there and I’m so shy about working myself in the house,” she said irritably, whereupon her husband drew his attention to the hustle and bustle in the neighboring garden.
„How nice when you have a relationship with your children,“ he explained pensively and a smile flitted across his face, „Speaking of where are our children actually?“
„No idea and I don’t care either!“, replied his wife, prickly, „This ingratitude, I don’t need that. You struggle all your life and do everything for them. And what is the thanks? As soon as they have their training paid for, they turn their backs and never look at them again.”
„You did everything for her?“, asked Mr. Diligently amused, „No, you always did everything for yourself because you are obsessed. Under construction, that was ok. You know we had a common goal and I liked working for it day and night, but we achieved that goal. Still, you went on like a mad woman. We have estranged ourselves from this and the children don’t want to have anything to do with you. And no, it is not necessary what you do. You just can’t help it, otherwise your life would collapse like a house of cards. Work is all you have. You have long forgotten life.“
„What does that mean, the children don’t want to have anything to do with me?“, Mrs. Hardworking was irritated.
„That I looked after them very well,“ her husband explained succinctly, „you just never heard of it because of all the work. And I even played with them. Imagine it. While you were busy with yourself and your madness.” Mrs. Hardworking leaned back in her chair and looked at him intently.
„So you cheated on me!“
„You mean I cheated on you with our children?“, he stated amused, „You know, there was a time when it hurt that you rejected me over and over again as if I were just one annoying fly. And the children suffered from your hard-heartedness, but they found their way and I think I’ll take a look over there, to those people who you think don’t work, bring them cakes and invite me for coffee.“ Talked and left. Mrs. Hardworking watched her husband for a moment, but then remembered that she had to work. The next moment she stared at her laptop again and had forgotten everything around. Because she couldn’t help it.