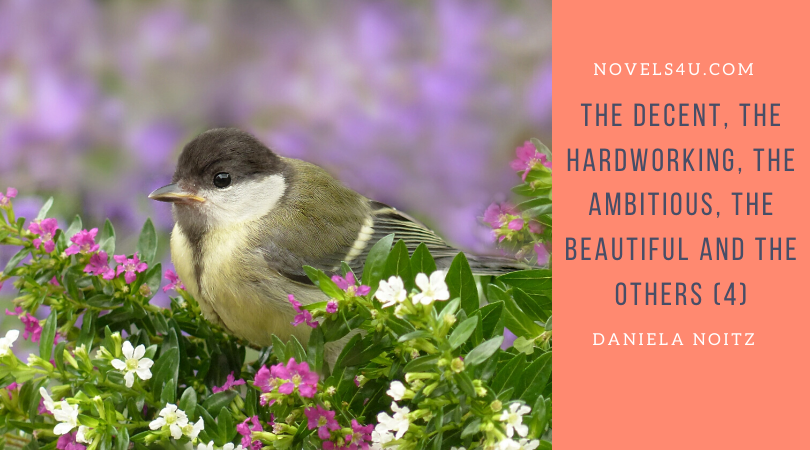 It was Ben’s voice that Lisa fell in love with even before she saw him. Her friend Sophie had persuaded her to listen to this great musician. She went grumpily, but as soon as they entered the bar and Lisa heard this smoky and at the same time so gentle voice, something happened in her. She closed her eyes to just listen.
„Let’s go to the front,“ Sophie asked. Lisa resisted. She didn’t want to fall out of her dream, but what should she have said? That she didn’t want to see him because the sight was just a disappointment? There was nothing else for her to do, but his sight was not a disappointment either, quite the opposite. The boyish smile that contrasted sharply with his tart, masculine features and the soft melancholy in his gray eyes were both irritating and beguiling. Lisa was completely confused. She would never have dared to speak to him. She looked down in embarrassment when he came to them after the concert and could barely utter a word. Lisa was still smiling when she thought about that evening, which had been several years ago. It was as if it was happening every day that she fell in love with him, his attentiveness and sensitivity, the way he kept bringing her back to life and making her laugh. It is always said that love wears out over the years, but Lisa had the impression that it was confirmed every day anew, the wonderful vitality of her love.

„Mom, we have to get up,“ Nina said this Sunday morning. Lisa looked around sleepily. How did she get to bed? All she knew was that she had fallen asleep on the couch. He must have carried her to bed. Smiling, she turned to face him, who had still closed his eyes, but she felt the pressure of his hands that her daughter had managed to wake him too.
„Sure, honey,“ said Lisa, brushing Nina ’s unruly dark curls from her face. How similar she looked to her father. The same cheeky smile and flashing eyes. Then Leo also crawled into their bed. It was a good day because they were together.

After breakfast they went into the garden because the sun was shining and it was time to inaugurate the new paddling pool. And while the children were raging in the water, Mrs. Beautiful watched them from the terrace. From the two-story villa where she lived with her husband, one could easily see the garden.
„What a strange woman,“ said Mrs. Beautiful, shaking her head when her husband came out onto the terrace, „doesn’t even have anything on her face. I bet she won’t do anything else.”
„You should finally get something done for that,“ said Dr. Beautiful and diligent, while he also took a look at the bathing pleasure, „After all, you won’t get younger and I don’t want the customers to stay away just because you are careless.“
„What does carelessly mean?“, replied his wife.
„You missed the last two appointments for spraying and you let yourself go at all. I saw a few wrinkles on your neck,“ he said laconically, „you shouldn’t forget, you are my figurehead and what a picture it would make if a cosmetic surgeon’s wife looked like an old woman.“
„Strange that everyone still wants to look like me,“ she said pointedly.
„Of course, they all want to look the same, because only what is standardized is beautiful. But to keep it that way, you also have to do something,“ he replied, „If I think about how much money I have already invested in you. I will certainly not tolerate you ruining it.“
„So I’m nothing more than an investment for you?“, his wife asked.
„Darling, you knew that from the start. What else should you be good for, you or any other woman?”, he replied casually.
„Is that why you dumped your first two women?”, asked Mrs. Beautiful.
„You know exactly what’s in our marriage contract,“ he said lightly, thinking about what that could be because she hadn’t read it as she remembered it, probably because she had trusted him.
„And what exactly do you mean?“, she wanted to know.

„That I can get a divorce from you if you start to let yourself go and make no claims,“ he said calmly, with the calmness that only someone who is sure of his victory exudes. Mrs. Beautiful noticed how the tears rose in her eyes. She had to get out of here not to suffocate. So, she put her Chihuahua on a leash and went for a walk to think in peace. The moment Mrs. Beautiful rushed into the house and left her husband, Mrs. Hardworking, who lived on the left side of Ben and Lisa, looked up from her laptop for the first time, grasped the situation, shook her head briefly and turned back to hers work too.