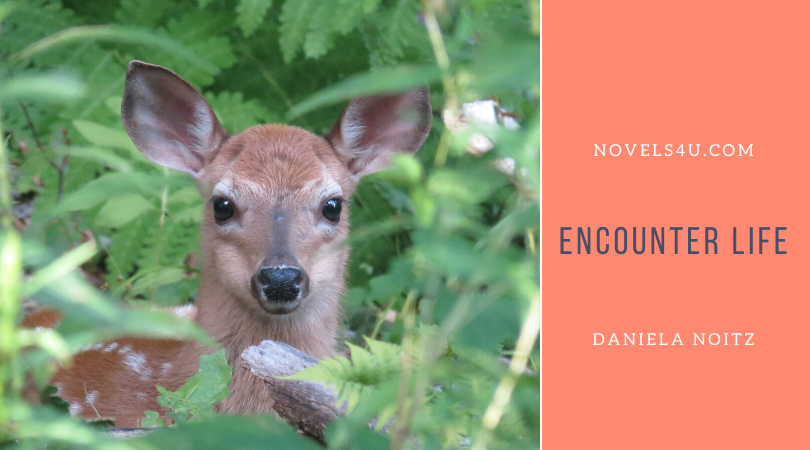 Lara was looking for someone who could understand her. It would have been enough to pretend. In this search she came to me. A friend from earlier days whom I had lost sight of because of her obsessive lifestyle. She had become a true jet set queen. Always on the go, never arriving. But now she was stranded with me and hardly that she had sat down and drank the first sip of her coffee, she started to wear down her misery. How bad life would be, now that you couldn’t get anywhere, than to the next supermarket and yes, there was also the hardware store. But that didn’t interest her. It was so common and everyone does it. Just like all the people who spend their meager existence between work and evening television, from kindergarten to retirement home and in between simply repeating the same thing. How could these people endure this? Lena didn’t really care, as long as she could curve around the world as she wanted. But that was exactly what she was now forbidden.

„What are people talking about?“, she asked suddenly, „I mean, they don’t experience anything. Maybe they don’t even need it. After all, they don’t know it any other way. So, it is not a problem if you have to stay at home, but keeping me from doing it is almost vulgar. „
„And what are you talking about in your so-called scene?“ I could not undertake to follow up.
„Well about the important things in life,“ Lara explained somewhat evasively.
„And what is important?“ I didn’t give up.
„Well, where you were, where you go, who you met, who you know, who with whom, you know, and stuff like that,“ she tried to answer.
„And is that really important? I mean, it promotes your life and makes you happy? ”I continued undeterred.
„Of course, and yes, I’m happy too. Otherwise I wouldn’t be so unhappy now,” she explained, already a little piquant.
„Don’t you think it’s more of an anesthetic, by constantly driving around and always being everywhere and nowhere, having superficial conversations with people you don’t know without really experiencing an encounter?“ I asked.
„How do you want to know? You’re only ever at home and haven’t seen anything of the world yet,” she said flatly.
„If you mean by ’seeing something of the world‘ that I didn’t go through all five-star hotels from here to Los Angeles or jump from one yacht to another, then you are certainly right,“ I admitted, „But that real life doesn’t happen there.“

And so I urged her to go into the forest with me and the dogs, without paying any attention to her complaining about the perhaps fashionable, but otherwise unusable footwear. Terrified that I had not only given her no understanding, but also forced her to deal with the disgust of disorderly nature, she whined to herself. We finally reached the clearing that I had chosen as the destination of our little walk. There we sit on a bench in the sun and the dogs lay quietly at our feet in the grass.

„What are we supposed to do here?“ Lara looked up again, but I gave her a hand signal to keep silent. It was the right time, the wind stopped and after a few minutes what I had hoped for happened. Carefully, looking around again and again, a doe and her calf stepped into the clearing. They didn’t seem to spot us. The dogs also kept calm, so that these shy creatures dared to lower their heads and graze. I had seen her a few times on my walks and hoped that Lara could experience this too. I looked briefly at her, who sat there silent and amazed. Perhaps we watched mother and child for half an hour, and then they disappeared into the forest again. Something must have startled her.
„I hadn’t even known that we had that,“ said Lara quietly when she finally found her words again, „It is so beautiful and peaceful.“
I could not guess what this encounter would do in Lara, but I noticed that it had changed something when she left me. It was a start.