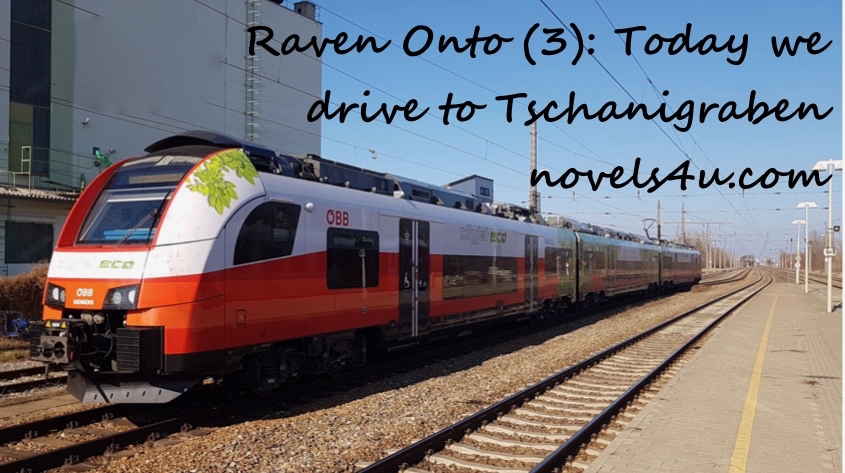 Tschanigraben, that is a place with just under 60 inhabitants, located in southern Burgenland near Güssing and the Hungarian border, picturesque, idyllic and above all not crowded. I wanted to go there, environmentally aware as I am, by public transport. After the official timetable information given me a travel time of 11 hours and 45 minutes, after all, was to cover a distance of 117 km, but then I wondered if they offered me because of the public transport not a Steptrain, I decided personally inquire with the service staff of this facility. Onto made the decision to sit on my shoulder and was not ready to leave this place, so I took him with me.

A few minutes later I entered the station. People gave me courtesy and I was pleased, but also positively surprised, to meet so many nice people. Onto followed my example and thanked with a loud croak. We lined up in the queue of people waiting in front of the counter, but it vanished from one moment to the next. Maybe they had changed their minds, I thought, but then it was my turn. The ÖBB staff member stared straight into his computer when I brought my request to him.
„You have to go to Vienna, from there to Güssing, and the next morning you can go to Tschanigraben,“ he said, „Discount Card?“
„Yes,“ I said obediently.
„Normal or seniors?“ he asked.
„Seniors,“ I answered, but after still keeping his eyes off the screen, the joke went nowhere.
„Makes € 9.40,“ he said shortly.
„And I want to take my animal companion with me,“ I added.
„What kind of animal is it?“, the official wanted to know.
„A raven,“ I answered succinctly.
„Small, harmless animals are to be carried in a suitable transport box and cost nothing,“ he lamented his rule, only to finally settle for a look. This was empty of content until he saw Onto. You could experience his awakening from the lethargy of everyday life live.
„Is he?“ the uniformed man asked.
„That’s him,“ I confirmed. „Maybe he’s not small, but certainly not unsafe, and I certainly will not put him in a transport box.“ Onto confirmed my unshakable decision with a hearty croak, which he probably also expressed what he only thought of being put in a tight box. „Besides, I certainly do not drive to Tschanigraben, if I need over 11 hours for it.“ High-lifted head and straightened shoulders, already alone because of Ontos staying on one of them, I left the station, where again all retreated. Maybe it was not because they were so polite. In any case, the desire to behave ecologically in an exemplary way is not necessarily made easy. While I was thinking about possibly walking to Tschanigraben, another thought came to mind. „Why do I want to go to Tschanigraben?“ In order not to meet too many people, I had to do nothing but walk in the nearby forest. It was Friday afternoon and people were shopping or shopping. Depending on the type of goods. What does all this have to do with the onto and the logo and their separation? A lot, because while all the other people are lounging around in air-conditioned, artificially lit shopping centers to buy many things that use up even more resources, things they do not even need to dispose of as soon as possible Impact on the environment, they think that they are doing the economy good, if they even think anything. And who needs an environment if the economy exists? In the evening you make yourself comfortable in front of the TV, tired of all the senseless activity, to be shocked that the rainforest is burning. Then you go to sleep. That does not change anything. But it does not have to, because after all we are fine. And you cannot take care of everything. It is enough to take care of what concerns ourselves. There you are busy enough.