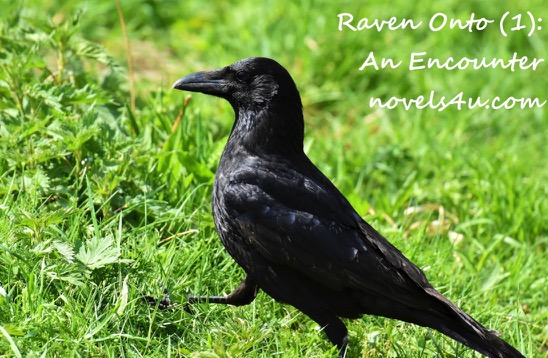 It was a gray autumn day when my dog drew my attention to him. He sat in the grass, yelling disgruntled. At least it sounded disgruntled to me. My bitch stood by, curious, but also a little anxious. She wanted to go closer, but did not really dare. That’s why she kept her neck as far forward as possible and sniffing carefully so she could still retreat in an emergency. I could understand it because I also had the greatest respect for this long, curved beak. So, I went to my knees next to my bitch and waited. He was not completely unknown to me because I had seen him often with our compost. Apparently, he always found goodies there. He hopped boldly on to me and immediately on my knee, so that I almost lost my balance. „You’re pretty heavy for a bird,“ I thought, finally realizing the reason he had shed his shyness and come to me.

His wing hung limp. I had to go to the vet, right away. The dogs were quite happy after it did not affect them. In order not to give me the idea of taking one of them with me, they rolled into their little basket and tried to be as invisible as possible. The bird, however, hopped from my knee to my hand, which I offered to him and from there to my shoulder. Anyone who had previously speculated that I was a witch would have found confirmation in it. The pitch-black bird on my shoulder could mean nothing else. He stayed while I drove, entering the surgery as if it were the most natural thing in the world. It was not until we entered the examination room that he hopped down over my arm onto the examination table. The veterinarian looked at him briefly to find that the wing was broken. Patiently he seemed to feel the plumage. It would take a few weeks, I was cleared up, then I could release the bird into freedom with a clear conscience. Furthermore, I learned that my black-feathered friend was probably a common raven, still a young, at most two years old. At this age, ravens continue to rage in teens until they find a partner and settle down at the age of three or four. Common ravens, as the name implies, belonged to the corvidae family and were by far the largest of their kind in Europe. With a body length of up to 67 cm and a wing span of up to 130 cm, it is very impressive. Especially if you have him sitting on your shoulder.

The next few weeks passed in the most pleasant harmony. After initial mistrust, our four-legged, besieged roommates got used to the new guest. From time to time the big bird, after he could not fly, let himself be taken for a walk by the dogs. He sat on ones back for this purpose and waited until one got ready to get up. Also, on our walks he accompanied us, where he preferred the place on my shoulder. Finally, the bandage could be removed. Immediately, he spread his wings and indeed, everything was again as it should be. No sooner had we left the house than he rose into the air. I saw him doing some fly rolls, then he was gone on the horizon. But a little sad, I drove home.

Yes, of course, I was aware that it was a wild animal and this belonged to the freedom. Everything was foreseeable and good. For a while, he would find a female companion and start a family with her. That’s the way it is in life. One can therefore imagine my astonishment when he knocked on the glass of the patio door in the evening of the same day and desired admission. As he was used to over the last few weeks, he received his feed rations with the dogs. Peacefully, they fell asleep. He flew away and came back as he fancied. That was fine. You get used to it. And the name we gave him was Onto. Strange name? Maybe, but of course it has a deeper meaning that I’ll tell you next time.