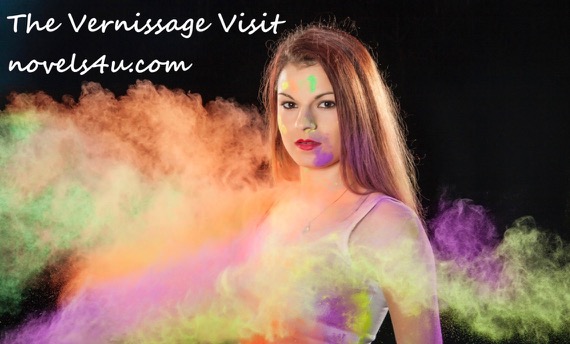 He had just made himself comfortable on the couch when she stood in front of him. He hesitantly looked away from the TV and towards her.
„You know that this vernissage is today?“ she asked slowly.
„Yes, yes,“ he replied, „I know.“
„I’d like to go there,“ she continued, looking at him with that look of anticipation.
„Could we do it,“ he replied evasively, „but we could stay home, too.“
„We can always stay at home, but the vernissage, which takes place only today,“ she said with a frown.
„So you want to go?“ he asked to make sure he understood her correctly.
„What am I talking about all the time?“ she replied gruffly. No, she had not said that, just considered the possibility, but for safety’s sake he left that unmentioned.

„Well then let’s go,“ he said, sighing while he was not even built, just thinking that he should leave the house again.
„Wait, it’s not that easy,“ she said, hands on hips, „I do not want you to go for my sake, but I want you to go, of your own accord and interest.“
„All right, yes, I want to go,“ he said obediently.
„You will not get away from me,“ she continued, „I want you to really want it. Not that I can hear myself all evening, that you only went for my sake. Say you want it, in a way that I can believe it. „
„I want to go to this vernissage,“ he said as he tried to sound as serious and believable as possible.
„I really want it. Say it!“ she demanded.
„I really want to go to this vernissage,“ he replied, dutifully.
„Well, if you really want to, then we go,“ she said, stepping towards the door, to turn to him again, „You really want to go to this vernissage? Why do you really want to go to this vernissage?“ He almost slipped out of it because she wanted him to, but he knew from years of experience that it would only add trouble if he reminded her of what she just said and most likely did not say. At least not like that. So, he was silent as she continued to study him.
„There must be a reason why you want to go there. You men do everything for one reason only, a woman,“ she said. „The artist should be young and pretty. Do you know her? „
„She was once introduced to me,“ he replied evasively, which was true, and yes, he was able to convince himself that she was young and pretty.
„Why do you suddenly have that sparkle in your eyes? So, you know her better,“ she guessed.
„No, I do not know her any closer and the glittering is surely just the reflection of the light,“ he tried to de-escalate.
„You have something with her!“, she said, full of conviction, „And now you really want to go. And you take me with you to see your beloved. What kind of a hypocrite are you!“
„I have nothing with her, I do not know her,“ he tried the truth.
„Yeah, yeah, you’ll admit it,“ she said irritably. „You’re not going to have an affair until I can give you solid evidence.“
„Fine,“ he decided. „Then we’ll just stay home.“ He was about to retake his cozy place on the couch when he was called back.
„No, my dear, you will not get away with it,“ she said energetically. „Now we’ll go a long way. I want to take a look at your lover. Exactly I will observe you and if only one wrong word falls, a suspicious look, then I have you. And then I will blow this march to this lady. She’ll be under pressure to ever look at a married man again. You belong to Me. No one else has to look at you. It must be made an example. After all, property rights are the highest asset in our society.“ Speech, opened the door and went out into the night. He guiltily followed her, with the unmistakable awareness that it would be a particularly nice evening. And he did not even have to be able to see clairvoyantly.