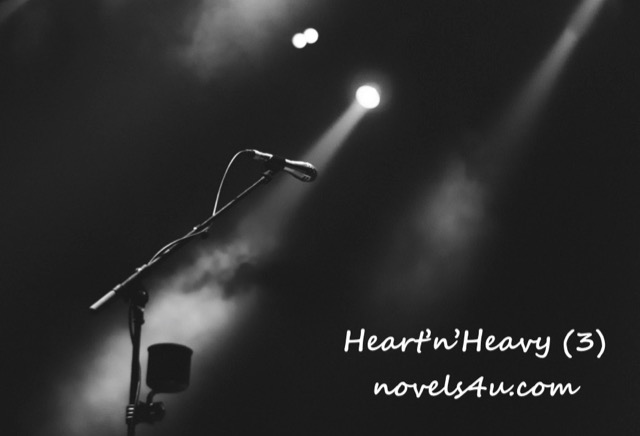 „Another hundred kilometers done, soon is halftime,“ I encouraged myself, „You can do that.“ I had said that I would wake one of them if I could not continue, but still it went and I actually wanted them let sleep. They deserved it. And it was good to let my thoughts wander, back to those days when the course was set for my future life. There were so many unforeseen, small fragments, which finally merged into a wonderful whole. It was about the tenth concert that I was present when something happened again, which helped to set the course.

The performance took place in a medium-sized hall, which was filled to the last seat. Not least because it happened in my home village and in the last weeks before that I had put all the levers in motion to encourage people to come. Fortunately, I was standing backstage while Blondie was standing at the bar. The last chord had faded, so I joined in the frenetic applause. Mic and Mike came up to me. I just wanted to congratulate them when I realized, how I felt dizzy. The effort of the day that made me forget to eat made itself felt, so that I just managed to stretch out my arms, but then I lost consciousness. When I came to, I was lying on the couch in her dressing room and Mic was kneeling next to me, completely disorganized and confused. He was so happy when I opened my eyes again.
„I caught you,“ he told me, still completely perplexed, „and I’m so glad you did not hurt you, but I do not know how that happened. It was all of a sudden …“ Intuitively, I straightened up, still a little dazed, and gave him a kiss on the mouth with a smile, also a bit to silence him.
„It’s all good, you did that wonderfully,“ I replied, releasing his lips, and mine.
„It should have been Mike …“ he added. Yes, Mike, I repeated quietly to myself and felt it give me a little sting that I could not match. Or not wanted. But it was over again. From then on, it was as if Mic had taken on the task of taking special care of me. Our friendship became more intense, while Mike stayed a bit outside. I did not realize that at the time.
„You can do your gossip on your own,“ he said succinctly. And indeed, sometimes I had the impression that I was talking to a good female friend rather than a man. Mic is very sensitive, I thought to myself. Men are allowed to do that. At least that was my opinion. So, we got closer and closer and one day, when Mike had long gone with one of his female fans to wherever they went, I invited myself into Mic’s hotel room. A wonderful, first, shared night, where I had the impression that sex was just an accessory. It was important that we cuddled and talked again. Talked and cuddled. It was good to be able to confide, a man who understood me like a best friend. Actually, an optimal combination, I was convinced, then and now. Since that night we were officially together. Soon after, I took over my post and kept it. We had become a team, one that drove through the country ten months a year, retiring for two months, as it did on that day. And I was very much looking for this retreat. We or, better said, my lads have never played in the first league, but good second and with diligence, ambition, courage and, of course, a little luck, we managed to find a place that allowed us to live well. There are many different ideas of a good life. That was ours. It was everything we wanted. How many can say that they are happy with what they have and like to get up every day? So, the years went by and all we had was the house in southern Burgenland and the tour bus. We did not need more. A great deal of flexibility and a little sedentary. Finally, I could turn off the engine. We arrived.