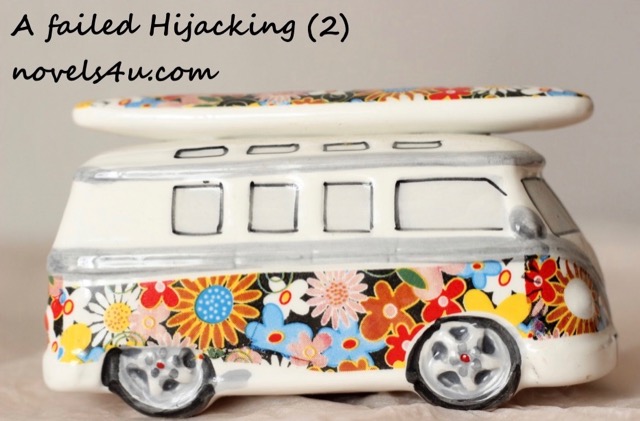 So Paul sat in the rented delivery van, in the dark interior and thought through the process again. It would not really have been necessary, because since he had made his plan, he had gone through it several hundreds of times, but as everyone, even halfway good, Cineast knows, this approach is essential, because the most important is always the planning. This provided that he was sitting in the van, in the moment in which the Lisi would pass this place, the door opened, he jumped out, the chloroformed cloth in one hand, which he would squeeze professionally on her nose and mouth, To catch her with the other, gently put her on the back of the truck to take her home, where she woke up and identified him as her savior. That’s the plan. It was perfect.

Paul sat and kept his eyes fixed on the second hand of the clock. Lisi came out of the building punctually, as usual, and took the path she always took. He continued to follow the pointer. He had calculated exactly how long it took from the door to the delivery van. Now it had to be done. Everything had to be exact. Paul opened the door of the van, jumped out and actually came to stand next to Lisi. He reached out his arm to press the cloth over her face, and then the unbelievable thing happened, absolutely unpredictable. A loutish figure with broad shoulders obviously wanted to go par tout between them. Instead of evasive, this person made room by pushing both Paul and Lisi aside. Paul could not see how Lisi had gone after the bully’s frontal attack, for he dropped into the van, his hand protecting his face. Unfortunately, it was the hand in which he held the chloroformed cloth. Two breaths later he was blissfully slumbered. So, the remedy would have worked, but Paul did not really care about that at the time, as did many other things.

When Paul woke up, of course he had to orientate himself first. If he only knew where he was? Had the spit now turned around because he had become a victim of the perpetrator, the kidnap victim? At last he realized that he was lying on his bed in his own flat. Beside him sat the gigantic figure. He also recognized these, but it was not a man, but an employee from the packaging department. The short hair on her head was confused, her broad shoulders straightened and somehow lost. All of a sudden, Paul forgot all the ladies in dress and hat and stole, forgetting the roles and the given tasks, while he thought how reassuring it must be to rest his weary, everyday head on such a broad chest. Was it a moment of weakness, self-forgetfulness, confusion? Paul did not know, but he did not think about it either. Probably the chloroform vapors were still dizzying on his mind or it made him release his most secret desires, so secret that he did not even know them or did not dare admit them. But anyway, he sat up abruptly, ignoring the pain and dizziness in his head to cling to his broad chest. The next moment, her arms were around him, holding him tight, almost like a baby boy, and he had to admit, it felt like Mama’s. Blessed he closed his eyes. He had completely forgotten about the sweet, little Lisi, while he enjoyed the security and the hug. What’s more, all the Lisis of this world could have been stolen from him, with their fuss and their mischief. A real woman, he decided, could do more, much more. And why should he be content with a dame if he could have a real woman, fresh, strong and independent. And Dana, that was her name, liked that as well. After all, there were few men who not only acknowledged her strength but also felt comfortable in it. Luckily, Paul thought for a moment that he was happy, that the oh-so-perfect kidnapping plan had gone awry.