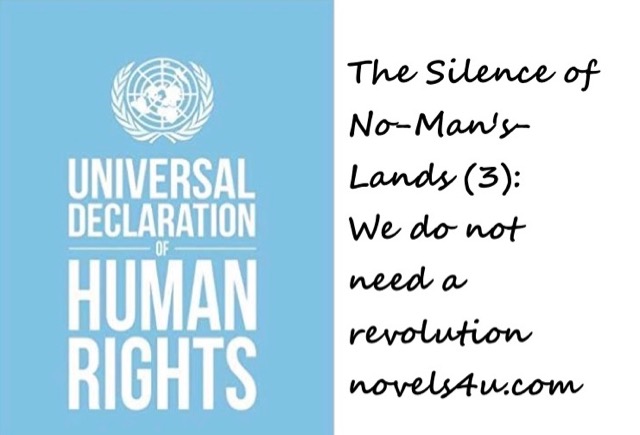 „Liberté, égalité, fraternité“, „freedom, equality, fraternity“ – yes, it is called fraternity, in the motto of the French Revolution. Establishment of civil and men’s rights, „Droits civils et humains“, it is deceiving, in French man is equated with human, and vice versa. It is forgotten. Some things are good to be forgotten, screened out in the barbed wire of history. That could be it, as a basis, as a basis of value, if you do not want to settle for schnitzel and beer, then maybe human rights. Rights that belong to every human being anywhere in the world. They do not stop at any border. On no barbed wire and actually not in no man’s land. But who hears what is swallowed by its silence? Beyond this silence, they were committed. No one thought of it when it was stated that the goal of human rights is to make every human being dignified. Decreed by the UN in 1948. A narrow ribbon consisting of 30 articles. It is placed next to Kant’s writing „What is Enlightenment?“. They are good there. In the no-man’s land of education. Censorship is no longer necessary. All you need is distraction through entertainment and consumption. The right to religious freedom in Article 16 is celebrated in consumer temples. A single, incessant service, the adoration of the golden calf and the swanky Gucci bag. It’s both. While the necessary for the execution of the consumption hegemony exploitation is concealed as possible.

Human rights are the basic values of Europe. Hard-won in the French Revolution, we also do not tolerate the export of values, so that we cannot refrain from complaining about the civilizational backwardness – behind the barbed wire and the no-man’s-land and its silence and the next barbed wire. And next to it goes schnitzel and beer. And who tries to talk that badly to us, around which a fence will be built, barbed wire around his thinking, around his tongue. Even if we value the freedom of expression and information in Article 19, they will only be upheld as long as it is the right opinion and the right information that does not interfere with cultural, social or even economic hegemony we can not tolerate the rebellious and rebellious. It would shake the foundations of Europe. Born of a bloody revolution, this kind of reorganization has now been done. We do not need a revolution, not even a rebellion, but constancy, vacuumization and standstill. We do not trust our foundations. The slightest breeze of doubt can make her waver. The cockiness in posturing, the timidity inside. That’s why we need more and more protection, outwardly, nationally, regionally and biologically. More and more barbed wires with the silence of the no-man’s-land, swallowing the call for freedom, as if it had never existed, because the shame remains present, the shame to be nothing more than the small appendix, cecum of Asia. Or the remnant of a kidnapping of an everlasting god. The little lover of Zeus, who was abducted by him, in the form of a white bull, came to this piece of land, which was then also named after her swiftly. Europe as the result of a immoral relationship. And that in our canon of values, which is as invigorating as an oil platform on straws that should actually be made of straw, not plastic, in an environmentally sound way, which does not change the steadfastness, but soothes our moral conscience continue to comfortably sit in the armchair to indulge in the actual values, beer and schnitzel.

And while we sit like that, shaking our heads and watching the events around us on television, either on social media, the last piece of green is plastered over. Construction is built around construction, while the previous ones slowly fade away, as critical thinking is slowly buried under consumer goods and delicacies, and more and more barbed wire is processed. Who wants to miss it, the silence of no-man’s-land? More and more will be demarcated, until one day it will be so far that I can no longer straighten myself up in the car, because no man’s land joins the other.