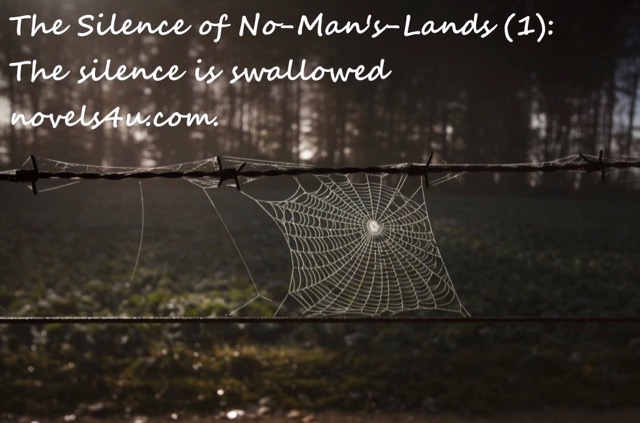 Nothing is so oppressive, horrifying, dissolving, devastating, as the silence of no-man’s-land between barbed wire and barbed wire. Like a web of spiders, bizarre, almost futuristic, but increasingly close-knit, they pervaded Europe, then, today. Land of life next to Land of Nothingness. No one’s. Utopos. Non-place. No matter where you were, you were always behind or in front of a fence, rescued to the land of the land, but when I had to pass through that land after passing the border and before reaching the other side, I automatically pulled in my head and squeezed very firmly in one corner of the car. Coyly, I might still be checking to see if the button that closed the door was pressed down. It was like life would stop. I hardly dared to breathe. If we stopped and got out, the land would swallow us up, soak us up so there was nothing left but a pile of clothes, four car doors open. The other cars were still over. As if you were invisible, if you stopped, in no man’s land, swallowed by the silence, as if we had never existed. Finally, we reached the other part of the border. I breathed, leaving no man’s land behind, to get away once more. But we had to go back. On the side from which we came, there was freedom, democracy and capitalism. The other side, which was marked, of dictatorship and spying and communism and imprisonment. That’s how I learned it. A part of Europe and a white spot in my imagination. As it was taught, at school, in life. That these were the bad guys, and we were the bad guys. That was it. That was it. 30 years later.

At that time people heard that there were always some who tried to escape via a barbed wire through the no-man’s-land and its silence. This oppressive, frightening silence. A shot tore her. „Shot on the run,“ it was said, in no man’s land, a piece of the world, outside the world. Beyond the laws and principles. Almost also of being. Immediately the disunity was swallowed again. The silence could not be dispelled. Nobody wanted, was allowed to go there. Nevertheless, they dared him to flee the attempt. Many succeeded. To start a new life, where it was good and democratic and there were bananas abundant, where the barbed wires stopped and freedom prevailed. Never to think about it again, to the silence of no-man’s-land. Until they realized we were in freedom, democracy, we also had barbed wire and no man’s land. They were allowed to cross, but they were not torn down. Not just between land and land. Everywhere were barbed wires, established or trained. Between people, especially. Between man and woman, between big and small people, between humans and other animals, between rich and poor, between you and me.

Silence of no-man’s-land. The no-man’s-land. Klara is sitting on the ground. She makes herself small, as small as possible, her arms over her head. She does not want to hear about her parents quarreling. Over her head, as if she were not there. And if she was not there, they would not quarrel anymore, her parents screaming over her head. There is no escape, she thinks until she discovers she can go away. In her mind, put a barbed wire between herself and her parents. And in between, no man’s land with its silence, into which it can escape. The voices bounce off. She does not hear her anymore. More and more often she moves back to it. Because she is no one in the world, she is someone in her imagination. Nothing else can be home to the one who is nothing in the world, for someone who is no one, but no man’s land.

Silence of no-man’s-land, between barbed wire and barbed wire. Kerstin plays with her friends. The fence is familiar to her. It was at a time when children were still romping outside. The world was her playground. The street lamps their clock. No control by phone calls. Certainly, no GPS tracking. He was standing for a long time, the barbed wire. What was on the other side, on the other side of the second barbed wire, the children did not know, that was concealed. Only that they were not allowed to go there was something they had been told. Bad people were behind them, they had been told. They had noticed that. Evil, that was a word that could mean a lot, but always something you do not want to do anything with. We are the good. The others are the bad guys. Over time, the fence fell into decay. Nobody cared. In some places he was no longer visible. Kerstin played. Interception. She ran. There, too, where the fence had once been, ran on, into no man’s land, without noticing. „Come back,“ Stefan shouted to her, her best friend. And he saw her turning around as she ran. A radiant laugh, cheeks flushed with zeal and joy. A step. A single. And then, an explosion. He saw her shredded in the air. She and her battered, old teddy bear, for she did not let go. Then there was the silence that swallowed everything, the silence of no-man’s-land.