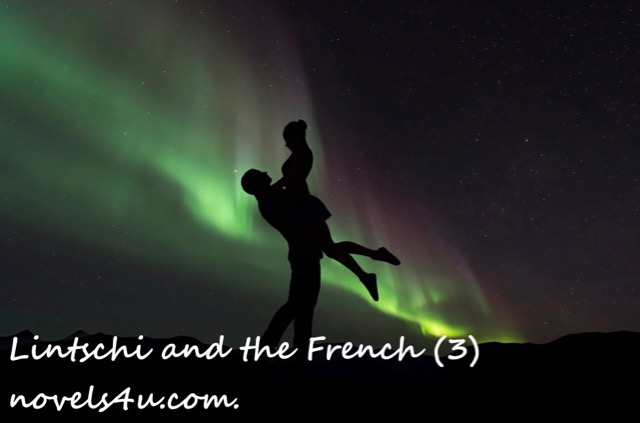 Lintschi was quite content with her efforts to improve her appearance, as she concluded with a final look in the mirror in her small but fine hotel room, which she had moved into immediately after arriving in Paris. The dress flattered her figure and brought out her exuberant cleavage, without being suggestive. The stockings with the seam underlined her long legs, but especially the high heels. Carefully, she draped her hat on the hair straightened for the purpose and took the bag under her arm. She was ready, especially for Pierre. But also Francois or Antoine.

Lintschi did not walk as far as she was accustomed to, but performed little triple steps, which she considered ladylike. Starting point was the Place de la Concorde, from which it strolled along the Avenue des Champs-Élysées, as well as rounding off the Rond Point of the Champs-Elysées, as well as the Arc de Triomphe de l’Étoile, to find its way on the Avenue from the Grande-Armée, until it reached the Place de la Porte Maillot, from where they continue on the same path in the opposite direction. Of course, she did not do that in one go. After all, she did not want to escape the Prince Charming, but to be found by him. That’s why she decided to stay in a café every few yards, draping the dress carefully around her legs, which she was able to showcase at her best side by side. And whoever thinks that this would have been rather boring and monotonous is to understand that he has never been in the situation to have waited for the sudden appearance of the man who was destined to conquer the heart of a girl. You do not just sit there, sip coffee, choose an aperitif, if you are well enough and you do not need to bother about anything else. Not at all. It was always important to make sure that the dress did not slip, the hat was sitting properly and the legs did not settle for an embarrassing, or at least terribly unimaginative, overlapping while the pose of the hand picking up the cup or the glass checked again and again and, where necessary, to be corrected, while at the same time looking for a possible, approaching candidate to simultaneously radiate complete disinterest. A task that required full concentration.

So Lintschi strolled, so in the case of Karoline the entire 6.8 km way, without being able to record the slightest success. Tired of the exertion, she made her way to the hotel while recapitulating the yield, which had happened quickly because it was nil. But she would not have been Karoline if she had beaten so fast. Deep in thought, she had not noticed that she was in a dark, narrow alley. At last, nourishing, dull, heavy steps tore her back to reality. Immediately she knew what was going on. That could only be Pierre or Francois or Antoine. Immediately her senses were sharpened and she was wide awake. Automatically she straightened her wardrobe, at lightning speed. Then she waited tensely until the footsteps were close enough. Everything depended on the right timing. When the time came, she gave a sharp scream to skillful people, and looked around again for safety, though she was sure that one step would suffice, a hearty stretching of her arms, and she would land in them impotently. She let herself sink. But instead of the arms of her prince charming, she made the acquaintance of the hard Paris cobblestones. Then her senses really disappeared.

The first thing she saw when she finally came to herself was a well-known belly whose stature was not least attributable to her cooking skills. It was not Pierre, certainly not Francois or Antoine. Nevertheless, she sat up and hugged the man she had known for so long and yet completely misjudged. She knew that words were not his thing, but what more could he do to show his concern for her than obviously having traveled after her? Romanticism or not, Frenchmen here and there, what really mattered in life, in real life, that was the banality of reliability. Of course, she continued to read her novels, because a little dreaming would probably still be allowed. And she insisted on being addressed with her real name. Karoline.