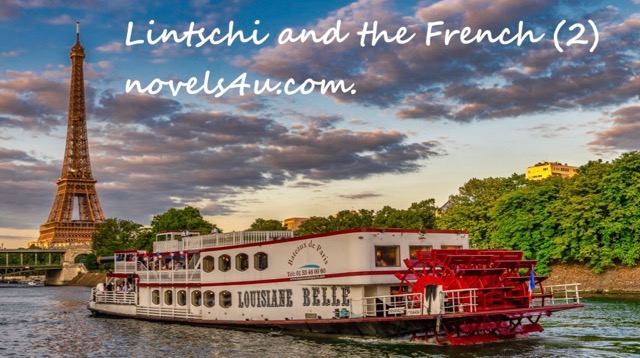 With time and distance the memory of the women wearing the headscarves in Tschanigraben faded, as well as her „there should the Lord God be before“, while Lintschi more and more often devoted herself to reading the so-called groschen novels. At first, she had been skeptical. „This has nothing to do with life,“ but as she delved into the story, she realized that the point was that it had nothing to do with life, neither her work nor her later marriage or raising the children. When, after a long day’s work, sitting on the couch next to her husband or later lying in bed, he gave himself a moderate snore, Lintschi left her life and immersed herself in romance and love. Nobody could do that as well as the French, she concluded. In that she was no longer Lintschi, but Karoline. The more the actual, real life demanded of her, the more often she went into her dream world, in which she always identified with the female protagonists.

The men who wooed her in these stories, gallant, polite, and obliging, were very different from the ones she knew, especially her husband. They were called Pierre or Francois or Antoine, and not as homely as Peter or Franz or Anton. It was so sonorous and auspicious. Alone the pronouncing of these names caused her goose bumps to run down her back. That could not remain without consequence, and it was not. Said Pierre or Francois or Antoine was, of course, a well-bred, if not aristocratic, man who lived a lottery life. Until he met a woman of simple descent, drawn out of drab conditions with nothing but a small bundle, but with a good heart. They meet each other, fall in love with each other, but before they can enjoy the happy ending in front of the altar, they still have some obstacles to overcome. Above all, the bad ladies who want to get Pierre or Francois or Antoine in their clutches, it is to eliminate. Of course, all they want is his money, they are scheming and insidious. But ultimately, they are unmasked and the Prince Charming decides for the Cinderella. The most beautiful Lintschi always found the scenes in which the poor girl for some reason faints, and their Galan catching her by return. When she then awakens from this powerlessness and realizes that he has not taken advantage of the situation in an immoral way, but cared much more lovingly, then she knows for sure that he only loves her. Then comes the question of all questions, „Will you become my wife?“, and with tears of joy she breathes her „Yes.“

And how had it been with Lintschi? One day her future husband came and said that it was time to get married because his mother said it would not work that way. So, they got married. That’s it. The last nice day, the white wedding dress and an expensive celebration. The next day, everyday life had started, spread and stayed. How much she yearned to break out of this one only, to lie in the strong arms of a Pierre or Francois or Antoine, saved and cared for, who treated her like a princess. It would also be enough to promenade the arm of one of those tall, handsome, dark men with blue eyes and a beaming smile on an avenue dressed in a beautiful dress, matching purse, shoes and hat. The desire became more and more urgent in her, so she said one evening, in a commercial break, to her husband.
„I would like to go to Paris for three days,“ he said, looking at him expectantly, but he mumbled something incomprehensible to himself.
„What do you say to that?“, she asked more directly.
„What about my food?“, he finally let himself be carried away to a spoken reply.
„I’m going to precook,“ she explained. He was satisfied with that and turned back to the TV, because the commercial break was over, while Lintschi felt confirmed in her intentions. She did not care about her husband as long as there was something to eat. Therefore, a few days later she sat on a plane to Paris, convinced that Pierre already eagerly awaited her. If necessary, Francois or Antoine.