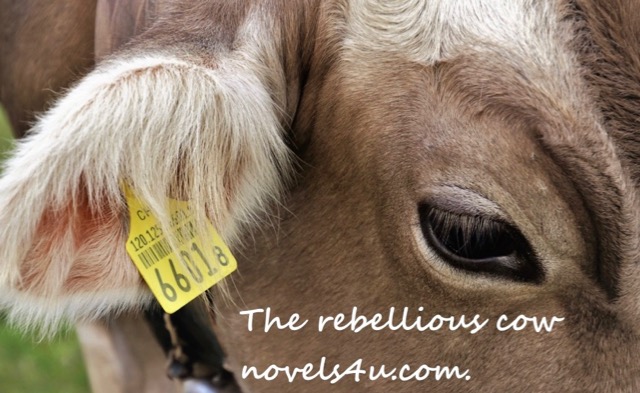 It was already dawn when I found her. The search had been difficult because I had to avoid being seen. So, I drove with my little boat, as calm and restrained as possible, from one island to another. There were many. The only thing I knew was that she had to stay here somewhere. At the same time, I thought about how she had managed to escape the madness.

Bella, that’s what I called her in my thoughts because she had no name as a meat cow. Only one number. On the other hand, she was allowed to live at least as long as it was necessary to feed enough meat, so it was lucrative for the farmer to sell her. Nevertheless, the day came when she was to be picked up and taken to the slaughterhouse. The farmer made the men who were to do this service even more aware that Bella was a rebellious cow. You should take something for stunning, he suggested them. Captured by themselves, as they once were, they thought that would not be necessary. They would have coped with every cow so far. But at Bella they found their teacher. Through blows and electric shocks, she made her way to freedom. She ran until she came to the water. But even this could not stop her. She swam through and after she did not show up on the surface for a relatively long time, some already thought she had drowned. In fact, she reached the shore of an island. But she did not leave it at that, because when they went on the search the next day, they did not find her.

„Apparently you’re swimming wider,“ I said to Bella as I sat under the tree, as it was already dark and she was lying next to me. At first, she kept aloof from me, but as her instinct had told her unerringly that the men did not want anything good, she knew that I was no danger. But on the contrary. I just wanted to be there and see them live. Cowlife. Unaffected. Undisturbed. Graze. Ruminate. Sleep. Still, she was careful. So, I sat under the tree and waited. In fact, she came to me and lay down next to me. Maybe it was good for her not to be alone. „Swimming further, as people believed you to be,“ I continued to speak to her, who just lay peacefully next to me and did not at all give the impression of a rebellious cow. Actually, she seemed calm and gentle, with her big, deep brown eyes. „You’re probably rebellious only where it’s needed. After all, it was about your life. You have only that. And even you do not own. The farmer owns you and your life and may decide what happens to you. Like a thing. Lord of life and death. Actually, one is used to it that the animals submit. They also have to do it, even if they die. Everyone should resist as you do. You have broken the arm of one worker at the outbreak, I have heard, and if I see you now, I would like to think that you could not harm a fly. You do not. I wish you could stay here for the rest of your life. Unmolested. But they will not allow it. The farmer loses money and his reputation. That must not be. It could be so easy, let live. Just live in peace and quiet. It just will not last long. „Patiently, Bella listened to me. Then we were silent. At some point I fell asleep while feeling her warm breath on my face. So close she had come to me.

The next morning I was woken up by loud engine noise. In fact, a helicopter circled over the small island. Bella tried to run away again, but she was struck by a stun dart and collapsed. In front of my eyes. I threw myself over her, wanted to protect her. But what should I do, against people who were determined to punish the insubordinate cow? Roughly they pulled me away from her. Then they transported her off. Still on the transport to the slaughterhouse she died of a heart attack. All because you cannot allow a living being to live.