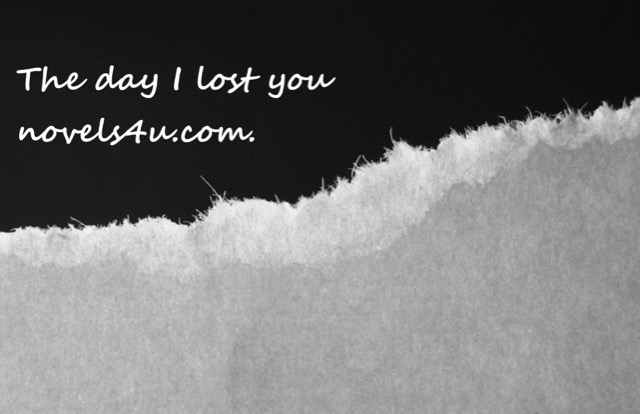 „I have to talk to you,“ you had started, back then. Although this was just three days ago. For a long time, you had worn yourself to tell me that, just what you had to say to me, and even longer had this malaise been in you. At first only marginally, just like a little pinch, which made itself noticeable from time to time. In between, it was good again. Like a disease heralded by small omens. But this pinch had become a pain, one that could not be ignored over time. It was the pain of losing. Then you did not realize what you had lost. It was not your wallet. Not your car key. It was not something that was anywhere, where you could just forget where this was. It was not a thing at all.

Rather, it was a loss of something that you could not even procure yourself. One day it had been there. No, not just there. It had built up, back when we found each other. Bit by bit. By getting to know each other, learning from each other. It was blooming with it. Always on. Shoot leaves and flowers, and you enjoyed it. But how much of it had been real, and how much easy interpretation, interpretation of a will. You wished it was possible. It is difficult to distinguish between reality and the idea of wanting something. Perhaps the togetherness, our togetherness was much more your wish than the reality, but now you had lost it. Not only the flowers had withered, but also the leaves and the branches. It was bald and withered in you. It began with the fact that our conversations had become routine. Everything every day. Well, that was probably so common, because at some point life is back in its tracks and there is nothing new anymore. Every day feels the same. The same questions. The same answers. Had not we been more sparkling earlier, more committed? Were we no longer worth the trouble to respond to the question, to understand the answer. The lies started when you said it was fine, but it was not. It is the sign that you do not want to open each other. No more. You are not worth it anymore. Vaguely, you remembered that it was different. Also, because we laughed together. Now the laughter got stuck in your throat. There was nothing left to laugh about, and if so, then behave. It was hard to explain. Also, the laugh. And yet it hurt that losing. Just as we had not guessed that we would find each other, so we had not guessed that it broke apart, so fast. We did not want one, and we did not look for the other. It happened – and it cannot be changed. So why hold on to something that is no longer growing and only hurts more?

„I have to talk to you,“ you had started, at that time, which was just three days ago, „I lost you and will not find you again.“ It came halting. You did not mean to hurt me, but you did not know how I was, because we had not talked about it, not yet. I just nodded and waited for you to go on, only the knuckles on my fingers had turned white, so much did they tighten around the handle of the cup. „We lost each other. I do not know when and where, only that it is so. It hurts. But something dead cannot be brought to life.“Again, I just nodded, but you did not know if I agreed with you or if it was just a small sign that I understood your words. Gently, you turned off your cup and left. I still did not say a word, only you could hear the clink of the cup as you closed the door behind you.