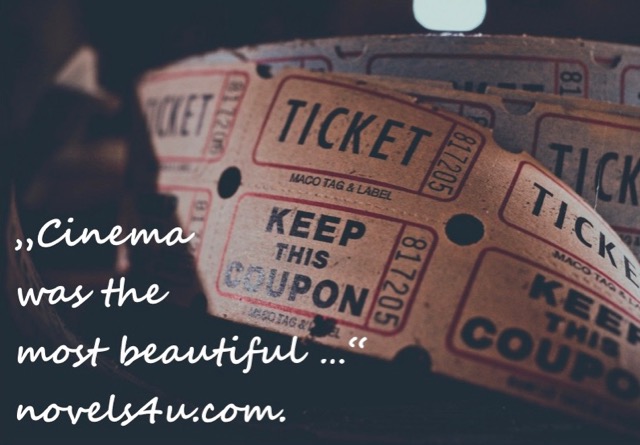 It was Sunday, 1938. The young lady, who was trying hard to earn the goodwill of local housewives as a shop assistant in the local general store, was on her way to the movies. Every Sunday she left the house just before 3:00 pm to go to the cinema. Preppy, with her Sunday dress and fragrant stockings on, she took the proven way, modestly inconspicuous, with lowered eyes. „What a good lady, the girl from the general store,“ the ladies of the place used to say, for, more than by her ardor and prudence in business, she had acquired the goodwill of those ladies by virtue of her virtue. „She’s not one of those who make advances to the lad by brisk and flirtatious looks, as a young, unmarried girl does not. She is always in business, active and diligent. Only on Sunday she goes out and there as well just to the movies and right after the performance back home,“ said the honorable ladies pleased. They probably would not have talked so favorably of the mistress of the general store, if they had known her secret.

Opposite the cinema was a small ballroom, where every Sunday, just at the time the young lady was going to the cinema, there were held dances for the young people, who were visited by the workers of the nearby factory. „The socialist, immoral rabble,“ they called the honorable ladies of the place the visitors of those events whose immorality was beyond doubt for those ladies.

One Sunday, a young man strolled up the street, his cap drawn to his forehead. He was probably new in town, because he was on the wrong side of the road. The maiden almost collided with him had she not at the last minute, against her habit, lifted her eyes and dropped them into his. Guard, cheeky, brown eyes seemed to smile at her. No, she did not know how long she stayed that way, definitely longer than decent. If she had just been happy to go to the cinema before, now it was her only life content, and not even the cinema itself, but only the way to the same, because every Sunday from now on, their paths crossed. For them, this condition could probably have lasted forever. One Sunday, however, he followed her to the movies, something he had never done before, taking her aside where no one could see her. „I did not want to leave without saying goodbye,“ he said shortly, and during the next few minutes of her first and last time together, he did not say another word.

Silently she smoothed her trim Sunday dress and straightened her fragrant stockings. Still, every Sunday she went to the movies, and every time she met him, who had been away so long. Every Sunday she went to the cinema, year after year, and even then, when the cinema was already closed, she went and sat down in the now disused movie theater. „Miss, why are you still going to our old cinema? It’s already closed,“ she was asked from time to time. „Cinema was the most beautiful,“ she said simply, actually meaning his warm, sassy, brown eyes.