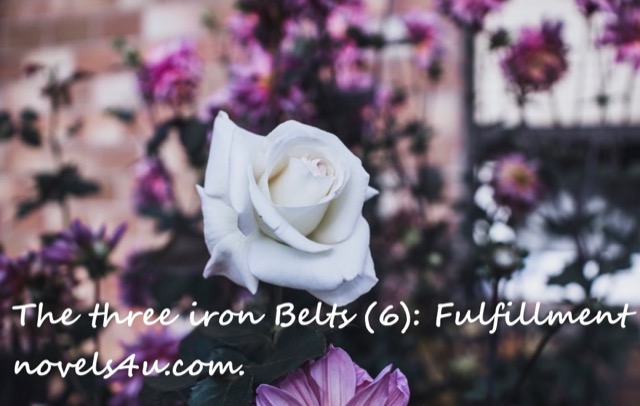 For years I had carried the iron belts, and there was neither happiness nor misfortune, but only indifference, but then I wanted to feel it, the happiness like the misfortune, and freed myself from the first iron belt and found in my life, from the second iron belt and found in a togetherness. And then there was only the third one. Already I could see my heart beating, without having to be held, as it expanded and grew. Already I felt that my heart could turn to those who wanted it, who meant me and not the picture that they had made of me, but the liberation was not yet complete, still not complete.

„Wear flat shoes, and you noticed as a smart woman,“ she said, and finally I could answer:
„I wear high and flat shoes, and if I’m a smart woman, you should note that in my words and actions.“
„You’ll see what you have of it, if you do not listen to me“, then it came back irritated and hurt, „Always these rejections, while I know it all the better.“

And I left her the iron belt, the woman in her fifties, who publicly behaved like a fifteen-year-old girl, left it behind, and set off. Maybe, yes, for sure, not everything will go smoothly and I will have to plug in, but it is something that I have decided for myself, which leads me out of the tutelage of all the well-intentioned advice, out of the expectations, the other put my life as it would be their own, led out of self-inflicted immaturity. I am no longer anxious not to offend anyone, but to be who I can be, to do what I can do, and in this way to enrich the world with me, because there are already enough copies. Finally, I began to understand myself as an original, which does not have to accept expectations from the outside, but can, if it is consistent. The discovery was mine before life and mine was with happiness.

„We do not recognize you again,“ some have said.
„You have changed,“ others said, „and not necessarily to your advantage.“, They could not refrain from adding.

Yes, I have changed, because my heart was free, could beat and breathe and grow, only the ones I was, I was not anymore. I had changed so that it was not me who was to make the choice, but the others, to go along with this change and to accept myself as I was, or to let it remain, to remain in their own petrifaction, to which – even purely visually – an iron belt fits so well that no longer belongs to me and that I no longer need, because I no longer want to tame myself and no longer be tamed, but to lead my life to fulfillment, to listen to my heart, in my own voice and to what is my talent and my talent, away from everything that was planned by anyone for me, anyone, just not me, breathing, feeling, living, finally without coercion and constraints, and yet responsibly with me and with you.