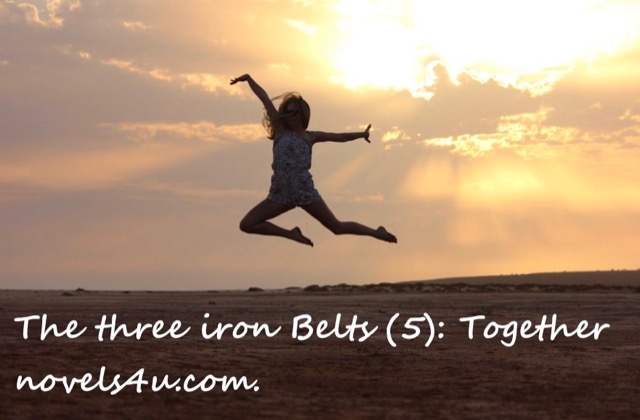 But one day I woke up, and the pain was gone, so much did I get used to it, just insensitivity. Not displacing, but changing, and on my bedside table was a picture, a small picture that had probably blown me a fairy godmother, a picture of a girl who danced and laughed. Carefully, I picked it up and examined it more closely. It was in the middle of the rain, and the girl’s dress was soaked, but there was no stopping, dancing and laughing. It must be beautiful, so free and carefree and unconcerned, it went through my head, and then I looked more closely and discovered that it was me. This girl in this picture, that was me, singing and laughing and dancing and defying the rain.

That was me? When should that have been? Feverishly I began to rummage in my memories, and indeed, very weak, it reappeared in me, this picture of lightheartedness, but there was more, the picture of my best friend back then, who accompanied me, laughed and danced with me and sang unconditionally, even in the rain.

I stood up, feeling my feet carry me, that they could still dance, and that there were still songs in me, and I felt the iron band, the second, loosen and shatter my heart, and I left to the people who surrounded me and told them that I had found it again, the singing and the laughter and the dancing, and some thought that was no longer me and that was not one of them, and I turned away from the way I should go. That’s not how they wanted me, and for the first time I could say that I no longer surround myself with people who do not want me as I am, but only with those who accept me, in my own being. That was stubborn and unreasonable and selfish, they said, and the way I do it, no, that would not work, and I turned away, leaving them behind me, all those who could not cope with me and not with it, that I no longer let myself bend, but stood by me, and then something began to grow inside of me, something that so far had received no light and no warmth, myself, authenticity, the power to stand by me, the power itself no matter what others said, and so, liberated a bit, I set off – and I found people who shook hands with me and walked with me, not despite, but because of my change, which also could not be bent and do not talk.

And I discovered that love grew in me, the love of life and what it gave me, that I could finally see, pure and unbiased. I felt reborn, in a world that had never seemed so beautiful and full of light and sound. Life itself had kissed me awake, and presumably the strength did not make me afraid to offend anyone else, if need be.

And when I went out, I could dance and sing and laugh again in the rain. „Look at her,“ some said, shaking their heads, „It’s all crazy.“ It may have been that way, but it was what I felt and what made me happy, and I was not alone, transformed the opposition into each other. Together, full of zest for life and lust and love, and the second iron belt fell from my heart.