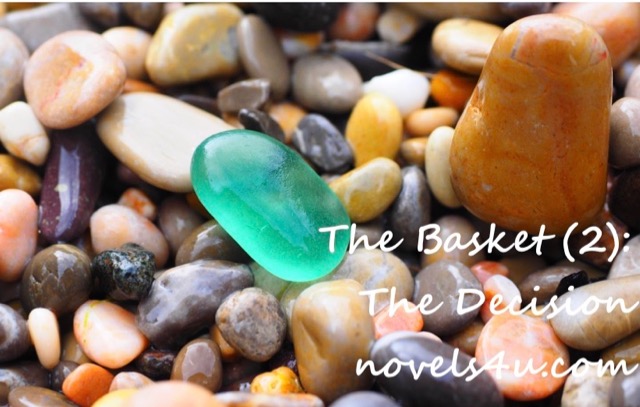 We had removed the lid from the basket and could hardly believe what we discovered underneath, because the basket was filled to the brim with stones of all sizes and colors, but they were only stones.

„Why are you just carrying stones around with you?“ I asked, a little disappointed with the discovery.
„I cannot tell you,“ she answered. „I did not load the basket on my shoulders and I did not fill it with stones.“
„Yes, you did not charge yourself the basket, because each of us gets such a basket, but you have filled it up, but without actually doing it,“ I said thoughtfully.
„What makes you think that?“ she asked, confused.
„Take a close look at the stones!“ I demanded.
„They all bear inscriptions!“ she stated in surprise.
„We all carry our load. For some, it is so light that it is virtually non-existent. These are probably also those who fabulously understand how to attach their burden to others. And with others – like you – it’s so heavy that it pushes to the ground,“ I said, weighing a rock in my hand, a particularly heavy one.
„But does that have to be that way?“ she asked further.
„What do you think if we take a closer look at these stones? Maybe we can find some that you could unload,” I suggested.
„Good idea,“ she agreed.

Next to the basket we sat down in the meadow. She was already reaching out to grab the first stone as she pulled it back.
„I do not know if that’s really good,“ she said.
„Why should not it be good?“ I asked, because I did not understand.
„I’m afraid of what might come out,“ she said meekly, again softly and bent, as if she still had the basket on her shoulders
„But you want to get rid of them, this burden? Or do you want to go bent over for the rest of your life?“ I challenged.
„Yeah, I want that, actually, but what if I get on it, finally, that they all belong to me or that I cannot hand them over because I’m in charge?“ she asked evasively.
„Then it’s still questionable if you really have to take it with you, if you are not responsible for something or for someone who you do not have to wear at all, should not wear?“ I said.
„So if I found a responsibility from now on that did not have to belong to me because I took it over for someone else, then I would have to give it back to someone else?“ she mused.
„No, you just would not have to do that, you have to,“ I said firmly.
„But I cannot do that! I cannot let the others down!“ she exclaimed violently.
„Yes, you can, because if they put you in charge, they’ll let you down and not the other way around!“ I demanded energetically.
„Okay, let’s start!“ she finally decided, picking up the first stone, an exceptionally big one, looking at it from all sides. His inscription was „mother“.