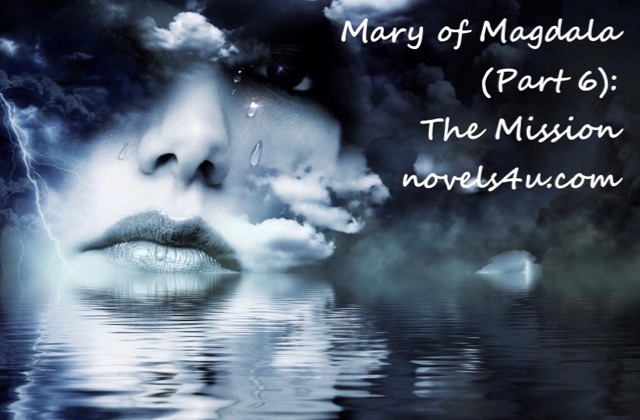 Hidden you are, the door closed, like your hearts, your little, timid, trembling hearts, and barricaded, whimpering and mourning. But it was not His fate but yours that you weep for. Disoriented, you were like a flock of sheep that the shepherd had lost.

Only you, you did not turn away, because your heart was big and strong. When you awakened from your impotence the next morning, and saw that the night of all nights, too, came to an end, and the life prevailed, the life He promised.

„To the inevitability, and far beyond.“, You promised Him, He has accepted from you. You kept your word and went „far beyond,“ to the grave in which you had placed it, but the stone that closed the entrance was rolled away and His body disappeared. And the tears ran down your face. Should that really be the end? Should you really have been so wrong? Should you really have been so deceived? Your heart said something else. In spite of everything. Did you really want to be misled by mere appearances?

When you looked up, there was a man in front of you, whom you first thought was the gardener, because your eyes were clouded by the tears.

„Tell me where you have put Him, Him whom my soul loves!“, you said, no you demanded.
„Mary,“ said He, nothing more, and yet only one had ever addressed you in this way, only one had touched your heart in this simple way.
„You live and are with me. To the inevitability and far beyond. „, you said, and your heart was overjoyed.
„Yes, to the inevitability, and far beyond. You kept your word, as the only one, kept your word.“. He said, and embraced you, kissing you on the mouth, and a wonderful, tremendous power flowed from Him to you, a force that exerted all human power far exceeded.
„But you cannot keep me, because I have not yet returned home to the father. But go and tell my disciples that I am alive.“, He called on you and went, without leaving, left you without ever leaving you again.

He went with you, as you did with Him, to the inevitability, and far beyond, with the power He gave you, and that never left you again.

How else would you have endured it? You went to the disciples, said what He had told you, but they did not believe you. Only when the signs were good did they venture out of their hole and proclaim the message as if it had never happened to you. You were the first person he appeared, but that was quickly forgotten. You were the only one who had gone with Him, to the inevitability, and far beyond. Your greatness, your faith and your love were disputed and pushed aside. What remained and was passed on was their cowardice, their small-mindedness and their fears. Did He want it that way?