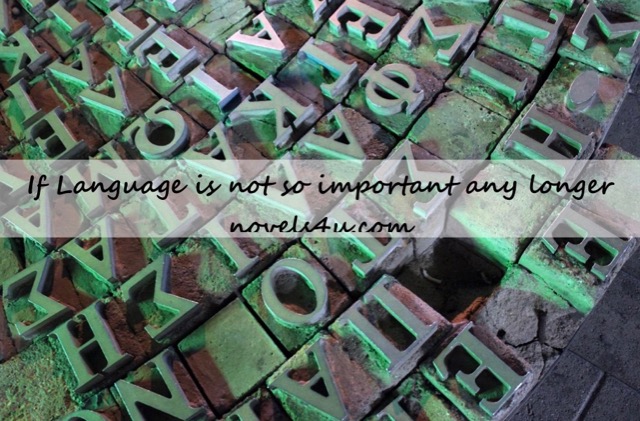 The human comes to the world by without voice, but by no means without communication. He expresses his sensitivities, wishes and needs in a different way, in his facial expressions, gestures and in sounds, which are probably already an indication of the coming possibilities to express oneself through language, but only as a forerunner. And it works, sometimes better, then with language.

Now one might argue that the range of needs is also relatively low in the pre-linguistic lifetime of humans. There is hunger, fatigue, boredom and loneliness. That’s it by and large. However, it is to be argued that this is not very different in the human being who speaks the language. Basic needs, as the actual, always remain the same. We need sleep, food, attention and security. Everything else is so-called cultural needs and is actually irrelevant, as long as those basic needs are not satisfied. Nevertheless, many people suffer from too little of the former, and thus find themselves compelled to compensate, often overcompensate, for this shortcoming. That ends then in the various addictions. Still, the question remains open as to why it is so easy to understand a pre-linguistic person, while we linguists have such an infinite difficulty in doing so. Moreover, as soon as the language comes in, there are only misunderstandings and disagreements.

The pre-human person is ideally surrounded by other specimens of his species, who are benevolent and attentive to him. Ideally. Mostly it’s just a specimen, and that’s called mother. The statistically most common constellation is therefore mother and child. The mother, who is responsible for the care of the offspring, observes it exactly. She learns to understand which gesture, which facial expressions and which sounds for the expression of which need could stand. A learning process based on the principle of trial and error. At the very beginning, the whole range is often tried out, but gradually the mother knows. Also considering the history of the day and the constitution. After a while, this pre-linguistic communication works perfectly. Gradually, the child learns to speak for itself when the environment is turned to, even quite multifaceted. A peculiar phenomenon can be observed, namely, that mutual understanding decreases with the increase in language ability.

Actually, one should assume that the more sophisticated and diverse one is able to express oneself, the more the mutual understanding suffers. So, should we stop talking and talk more about gestures, facial expressions and sounds, so it’s true that language is not so important? It would be an abridged conclusion, because no matter whether it is in the vocal or linguistic, speaking with the assets, we lose another, important component, which in both spheres represent this and that. We lose the affinity. If the mother was focused on her child, provided with the desire to understand, we cannot even see right on them once the children are able to speak. For the most part, conversations only take place between the door and the Angel, if anything is said. Hardly anyone takes the time to sit down and really listen to the other, without even completing the sentence in their thoughts, without digressing, without prejudice. In that sense, language is really no longer important. But not because it is not important in itself, but because it is not heard. Or just wrong.

But if we take the other person seriously, are facing and attentive, then the language can be a bridge from you to me, from me to you. Then an encounter takes place in freedom.

Therefore, it is a declaration of bankruptcy when people whose tools are language declare that it is not so important. Language workers have no inherent obligation to be as important as language. Because in their function they have a certain role model effect. Thoughtful, rounded and seductive it should be and the readers, listeners to convey the possibilities of a successful expression, only the dedication, they cannot take anyone.

Speaking and listening in affection and familiarity, supported by respect and the will to understand, are the components that make a successful dialogue. In it, language is the tool that, well-used, can lead to successful encounters in just such a relationship. It is, as with any other tool, the full commitment, and in this sense, you cannot appreciate it high enough.

Anyone who, as a language worker, believes that this is irrelevant, should, as far as possible, turn to another field of activity, for the benefit of all. Probably also her own.