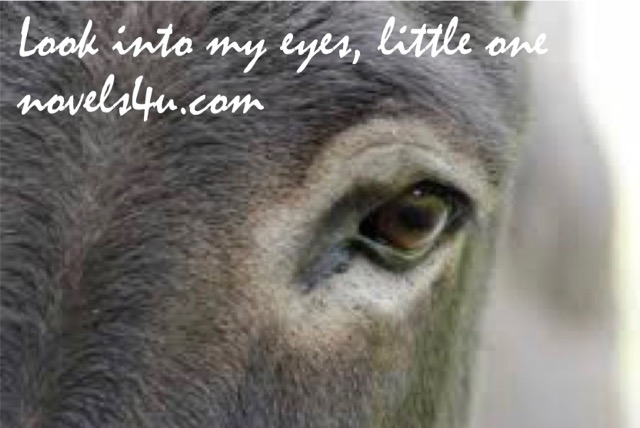 It started in Ireland, and it began unnoticed, like so much that later turned out to be trend-setting, unnoticed by anyone else, of course, but also unnoticed by myself. So, this was the start in Ireland, more specifically in a small village named Ballydavid on the Atlantic coast on Dingle Island. We stayed there in a pub with attached rooms. In the morning I left the room, soaking in the harsh, yet invigorating, salt-soaked air, and headed for the breakfast room.

Next to the house where the breakfast room was housed, there was a pasture surrounded by a low stone wall, as is customary in these latitudes, and when I looked up, I was almost eye to eye with him, the donkey. It was a well-groomed donkey with dark brown fur. I looked at him. He looked at me. At first, I did not think much about it. Donkeys are just stupid, they look just like that, everybody knows that. And as if he could have read my mind, he raised a piercing I-Ah, which meant nothing else – in my ears – than that I should take a closer look. And not only that, it was also a call to reconsider what I thought I knew about donkeys. Well, so I said tonelessly to this donkey, one hears generally that donkeys would be stupid, as already mentioned, but even more proverbial is their stubbornness. Besides, they are not as fast as horses, not so elegant and not so resilient. Even mules can perform better. It was all in my head, and his gaze remained fixed, unperturbed, no matter what I would guess, unflustered, insisting that perhaps I should take a closer look. Instead, I went to have breakfast, and as I left the green island behind me, so at first the thought of the donkey, but from then on donkeys always seemed to cross my path. Maybe I could finally see them.

So once again I stood at a gate and looked at donkeys. There were three in this case, one gray, one brown and one white. Curious, they approached me, sniffed me extensively and let themselves be stroked. More and more they took in my thoughts, and I began to roll books. Meanwhile, I know that one can learn a lot from donkeys, so the serenity and tranquility of their environment. They are attentive and curious, but at the same time unmoved, if it is not important enough. „It’s not worth the effort,“ they seem to say. And that’s probably what they like to be construed as stupidity. They are really more awkward than horses, but they do not panic at the slightest noise, but are alert and watchful. Maybe they are not as resilient as mules, but they are willing and cooperative as long as you treat them well, which is also relative, because treating well means having access to a barren pasture in the case of a donkey. They are happy with that, as long as they do not have to be alone, because donkeys are sociable creatures, whereby the journeyman does not even have to be a donkey, but can just as easily be a goat or a sheep. He does not like being alone. They also defend theirs when necessary. So I experienced a donkey that drove off a cyclist or recently a donkey mare, who every time I tried to photograph, protectively placed in front of her foal. But the donkey also protects his human companion. So, Andy Merrifield tells in his wonderful book „The Wisdom of Donkeys“ that his donkey diverted an angry, nervous horse from him to keep him from being crushed under the hooves.

Lately in the steppe animal park Pamhagen, two white donkeys who came trotting without shyness and let themselves be stroked with obvious bliss of the neck. Much of what I could look for from these animal comrades, but above all it is the calm that calms me and the serenity that makes the world seem much friendlier.