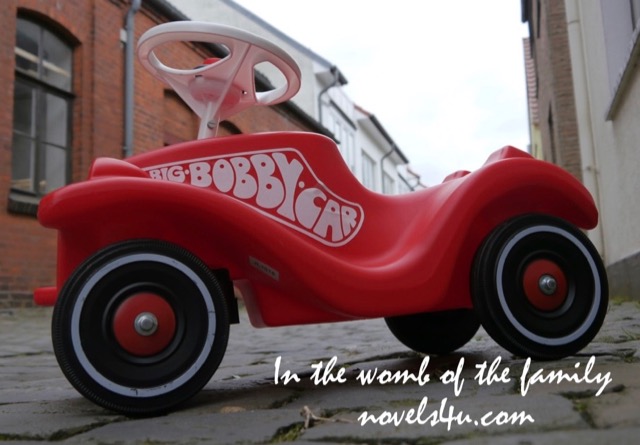 He was completely alone. He was sitting next to the bath fence on his red Bobby Car. 35 degrees. No shade. He looked through the fence. He looked longingly at the bathers. A woman with a boy took pity. „You cannot take it with you,“ the lifeguard explained succinctly. „Why not?“ The woman asked. „Who takes responsibility?“ He merely said. „And who takes responsibility when he collapses out there in the blistering heat?“ The woman countered. The lifeguard merely shrugged. That meant as much as, that’s none of my business. Outside the bath, he can even die. I’m not responsible. Everyone knew the boy, saw him driving through the place with his little red bobby-car. And he was only five.

You cannot do anything. This was said to the kindergarten teacher. He always came alone to kindergarten. You cannot do anything. One wants to look once. You did not look. More worried citizens answered. There would be no need for action. He has a family. He should stay there. A grandmother who was too old and too frail to take care of herself. But it was family. And they lived in a house. The woman invited him. He ate as if he had never got anything to eat. And he was as timid as a shy deer. Yes, his mother was in Kalksburg. The father would be there for that. Even if he was submerged again and again. His car had a Romanian license plate. Tax matters were said. But there was an uncle for that. Also you knew the place. A drug victim was said. Psychotic. But he was there. Even victims. The big brother was noticeable, even in elementary school. There would be nothing left to do anyway. And the sister, at fourteen, was emulating the mother. But there was family and no need for action.

Then the summer was over. He was still driving around town with his little red Bobby Car. The humans had gotten used to it. Until one day the Bobby Car left the main square. The boy was not there. The woman saw it and was afraid something might have happened to him. That was not the case, they reassured her. And what she cares about. Whether she was related to the boy. No, but he was dear to her. You did not understand that. But you do not have to understand everything. Anyhow one intervened politically. The police came this morning and took him away. Where? One had belonged to a foster family. Even if it was not common. He had a family.