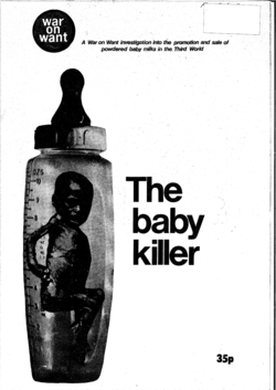 „How beautiful you are, my little Nebou,“ Tamia thought over and over, holding her daughter in her arms, „you’re the most beautiful being in the world.“ And Tamia was just 16 when she got her first daughter, but that was not unusual where she lived, in a small village about an hour’s walk from Ouagadougou, the capital of Burkina Faso. Tamia had given birth in the hospital. It had been an easy birth. Now little Nebou lay at her breast, and drank, and drank with such enthusiasm, motherly milk to such eagerness, as if she would take life in herself. And that was it, life. Breast milk. Milk for the baby, her baby. It seemed to have been exhausting, because at some point Nebou’s head sagged backwards. In the middle of the sucking she had fallen asleep. And Tamia held her in her arms and was happy.

„What a beautiful baby,“ a voice tore Tamia from the contemplation of her little daughter. A nurse had come to their bed and smiled at them, „But you want your daughter to stay healthy and grow tall and strong?“ The nurse continued, and of course Tamia wanted that. „So, you better go with her give milk powder,“ explained the sister, „because everything is inside, what your baby needs. And your breasts stay beautiful, for your husband. Men do not want women with ugly breasts. „And Tamia confided in the woman she considered a nurse because she did not know she was not a nurse, but a paid nurse from Nestle dressed as a nurse, the women familiar. So, Tamia stopped breastfeeding. A few days later she returned to her home village. Only then did she realize that the powdered milk that she had initially received for free was very expensive. But she had to buy it because she stopped breastfeeding and ran out of milk. So, she stretched it out and took the water she needed to mix. But the water was not clean. Nebou had diarrhea, quickly fell and was dead a few days later. And Tamia could do nothing but sit by and watch her daughter miserably die.

She would not have had to believe the sister, they say. It is your own fault if you do not think about it. Well-meaning, arrogant first-world voices reproaching a simple girl in one of the world’s poorest countries for trusting.

Thousands of babies died and die, not only in Africa but also in South America, as a result of aggressive marketing methods for milk powder in hospitals. Local women had been hired to gain women’s trust and sell the expensive, though highly subsidized, powdered milk. And they were recruited by the Swiss Nestlé group. In 1974, a booklet entitled „The Baby Killer“ was published by „War on Want“, blaming Nestlé for killing thousands of babies. This booklet has been translated by Swiss activists entitled „Nestlé Kills Babies“. The Swiss group complained about this because of defamation and slander and won the case. Thirteen activists were convicted for defamation and a fine of 300 francs each. But they had the moral victory, because the judge held in the verdict that Nestlé is responsible for the death of thousands of babies with his unethical behavior. In addition, WHO established a restrictive list of criteria for the marketing of baby food. Thus, the products must contain a note that breastfeeding is the best in the first six months of life.

In fact, Nestlé does not stick to it, despite all the lip-service. Although no disguised nurses are sent anymore, doctors and nurses, real ones in the case, are a little bit financially supported. But that’s not all. Milk powder, which continues to be a major sales success for the Group, especially in third world countries, is produced from European milk, so that producers in the countries of destination are plundered and ruined. In addition, each year, Nestlé receives 25 million from the taxpayer as subsidies. In short, Nestlé exports a highly subsidized product to third world countries, ruining the dairy industry there and also making a healthy profit (srf-wirtschaft). And babies are still dying as a result of aggressive marketing and a more than questionable product.